Slimmest of All People,
I have a problem with procrastination, so I joined a group called Procrastinators Unite.
But the meetings keep getting postponed.
Slim Folks! How are we? Everybody OK? It was quite a week here in SlimVille…
I went to visit my brother, the Very Private Slim Bro, near Sedona, Arizona. Slim People, if you haven’t been there, you need to go. Drop everything, load up the pack mules and head there. Don’t put it off!
It’s so stinking beeyooteeful. It really is. 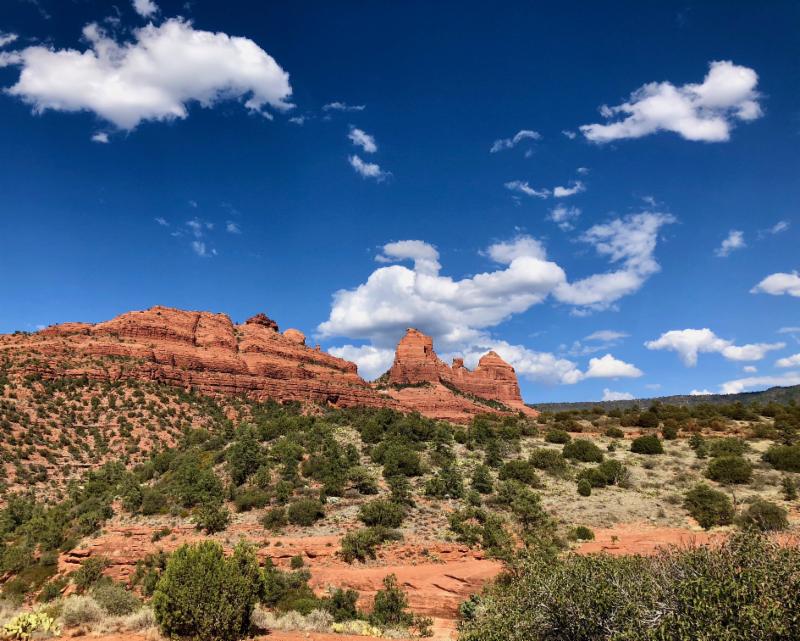 I was driving around outside of town, looking for a library. I’m working on a new cookbook, and new music, and I needed a cool and quiet place where I could procrastinate for a few hours.
As I was driving, I saw a white hearse about 100 yards up the road.
There weren’t any cars following behind it. It got me thinking, which is a problem for me because of my ailment, Attention Surplus Syndrome. You know the acronym. It’s the opposite of ADD. I think about things for way too long…
And I got to thinking, wow, that’s sad. A hearse with nobody following. Can you imagine, nobody coming to your funeral?
I mean, you wouldn’t know, because you’d be dead. Hopefully! It wouldn’t be much fun to be in a casket, still alive, banging on the lid, trying to get out.
Then I started thinking about the song…Eleanor Rigby. Died in a church, and was buried along with her name. Nobody came. All the lonely people.
Then I started thinking…I want a Viking funeral; put me in a small boat filled with straw, push me off the shore, and shoot flaming arrows at me until I burst into flames.

Just make sure I’m dead first.
My ASS was kicking into high gear as I pulled up alongside the hearse… 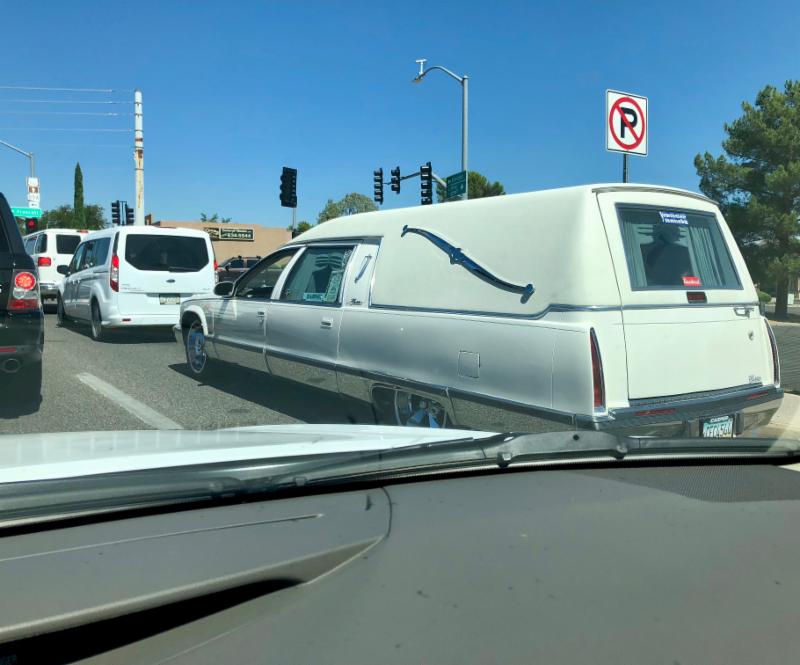 There was an old hippie driving it. It was his regular, every day car. He was a Deadhead, which, for you younguns, is a follower of a band called the Grateful Dead.
Damn! All that thinking and worrying for nothing! I guess you have the right to drive whatever you want, but to me it seemed a little…misrepresentative.
What if the guy wanted to drive an old firetruck around town and passed a house on fire with women and children inside?
“I’m sorry folks, this isn’t a real fire truck, but I have a bottle of water in the front seat, if that’ll help!”
I drove on, looking for a library. On the way, I saw a coffee shop, one of those hipster places, except this place wasn’t run by young guys with oversized glasses and beards. It was run by women. Woman power!
So I got a cup of coffee and sat down. I figured, why not just hang out here? Libraries are great places to work, but this joint had food and coffee and they were playing real cool music. So I settled in…
Writing is like fishing. Sometimes you catch a big one, sometimes you catch a small one, and sometimes you catch nothing.
After a couple hours of nothing, a song came on the sound system that really caught my ear. The song was cool, but it was the production that really caught my attention.
It had a bass part that was doubled on guitar, the girl was singing this cool melody, then the drums broke into a crazy tom-tom beat. It sounded like somebody took a 1990s dance song and ran it through a time machine to make it sound hip and modern.
The production, she was a-so nice!
I took my phone and held it up to the speaker. Siri told me it was a song called “No Roots” by Alice Merton. I looked it up on YouTube (29 million plays), and then searched for the producer.

I wrote a song a few months ago, and what it really needs is a production just like “No Roots.”

I found out who the producer was and emailed his agent. I asked how much it would cost to have this guy produce a Slim Song.

20K. Twenty thousand dollars to produce one song. No joke.
So I crunched some numbers…
YouTube pays about $.0006 per view. Seriously. At 29 million views, “No Roots” and Alice Merton pulled in about …$17,400 bucks.
I decided to put off hiring that producer until a later date…
That night, before I went to bed, I saw a tarantula outside the back door of the Bro House. 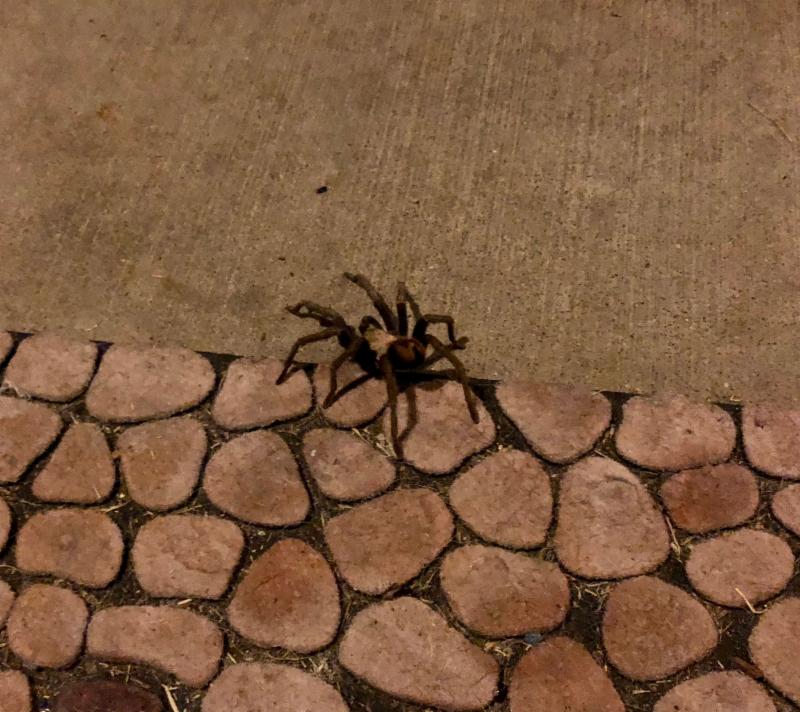 It was as big as my fist. I didn’t sleep real well.  I kept thinking about that James Bond movie where the tarantula crawls across his bare shoulder while he’s sleeping.
If that ever happened to me, the Slim Bro would be pulling me by my ankles, trying to get my head unstuck from the hole I’d just made in the ceiling.
I left Sedona the next morning and drove back to Palm Springs. 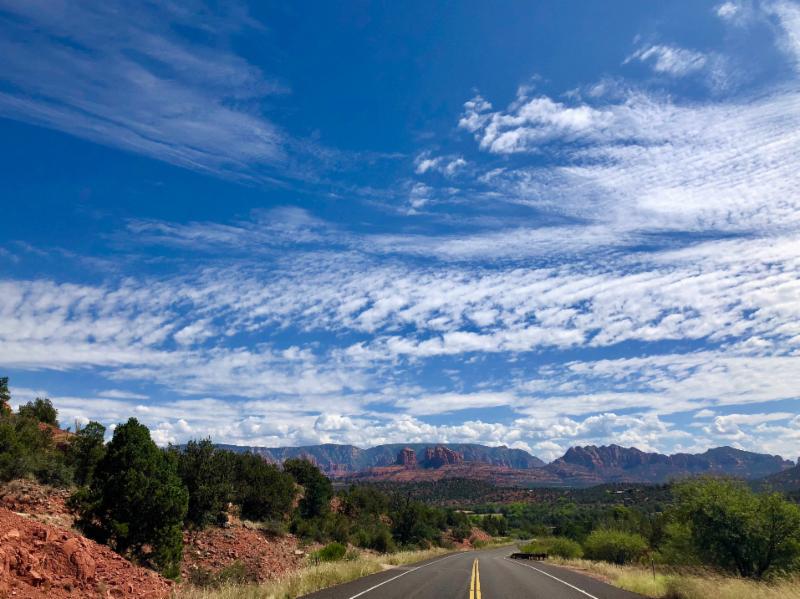 I had to get back for a big gig on Saturday. I’d been asked to play at a wedding; they wanted me to sing some Rat Pack songs. I pulled the Slimousine up to the house in Hollywood, and the band and I set up by the pool.
One of the first guests to arrive was John Goodman, the actor from the Roseanne TV show, and most of my favorite Coen Brothers movies.
And then Bruce Willis walked in. He walked up to me and we started chatting.
He told me he was at Martha Stewart’s house (they’re neighbors) for dinner a couple nights before, and the food was amazing. He asked me about the music I was playing on the PA (Marvin Gaye).
He started talking about the Comedy Central roast that just aired. Bruce was the Roastee.
Then a helicopter started buzzing overhead. When I looked up, it wasn’t the cops. It was somebody else, circling the house.
Bruce Willis didn’t look up once. And then I got it…it was probably some papparazzi or TMZ trying to get a shot of him at the party, and Bruce didn’t want to oblige.
This is gonna sound weird, but I almost feel sorry for these famous folks getting hounded like that. I couldn’t imagine a helicopter following me around, unless it was the cops chasing me down some side street in Baltimore.
Which leads me to this strange request, SlimNation…
Please don’t share these photos or this post.
I don’t want to…invade these people’s privacy. It was a very lovely and very private wedding. So let’s keep this between Us Slim People. I’m not even gonna share this on social media.
The wedding started; Bruce Willis and John Goodman were among the groomsmen. The lovely couple said their vows, exchanged rings, and then I sang some Sinatra and Dino with a trio…piano (Richard Turner), bass (Roberto Vally), and drums (Craig Chesnut).
First dance? “The Way You Look Tonight.”
After about an hour of Rat Packin’ songs, Bruce Willis came up with a guitar player. Bruce had some harmonicas sitting nearby on a bench in a white case, and we started playing “Not Fade Away”.
Bruce played the sharkshit out of that harmonica! He was real good, Slim People. I sang a few songs, he sang a few songs, and I tell you what…the man can sing the blues. 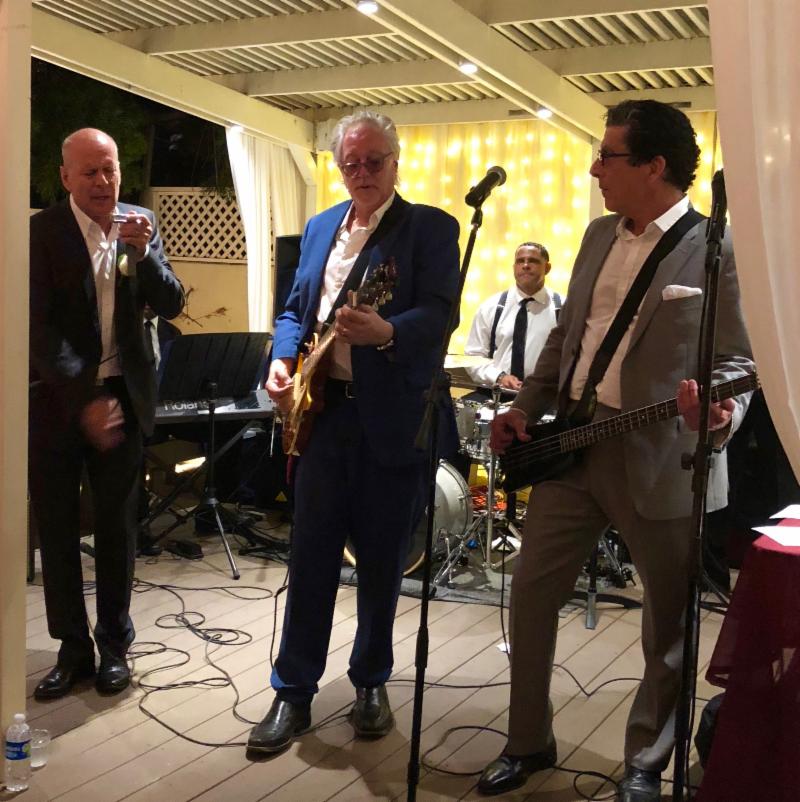 I had no idea.
During the party, nobody was snapping selfies and sharing on FaceBook. They’d probably get booted if they did. About the only one taking photos was the wedding photographer.
But when Bruce hit the stage, just about everybody whipped out their phones and started taking photos and videos.
After each song, Bruce and I would go over what song to do next, what key, and we’d launch into it. 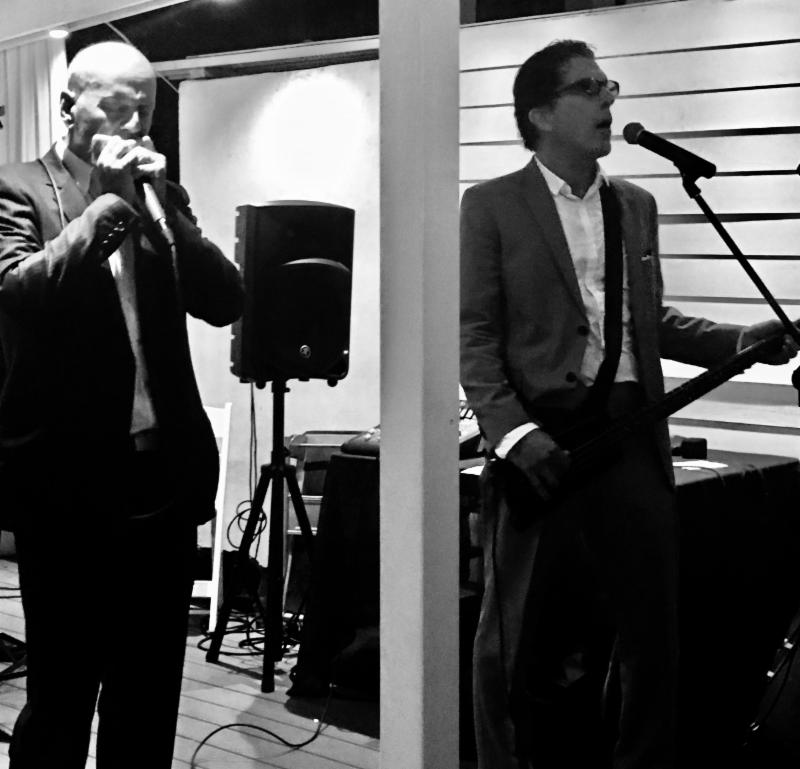 Slim People, it was so much fun. He played great, sang strong, and was a regular guy, like one of us.
And what a wonderful party and wedding.
Maybe he’ll call me up and see if I want to start a blues band. The Slim Willis Blues Band. Or the Bruce Man Blues Band.
But after he crunches the numbers, he’ll probably realize he’s better off making movies!
And that was the week that was.
Keep in touch, Slim Folks. And keep smiling. Don’t put it off until later!
Who loves ya?
Uncle Slimmy 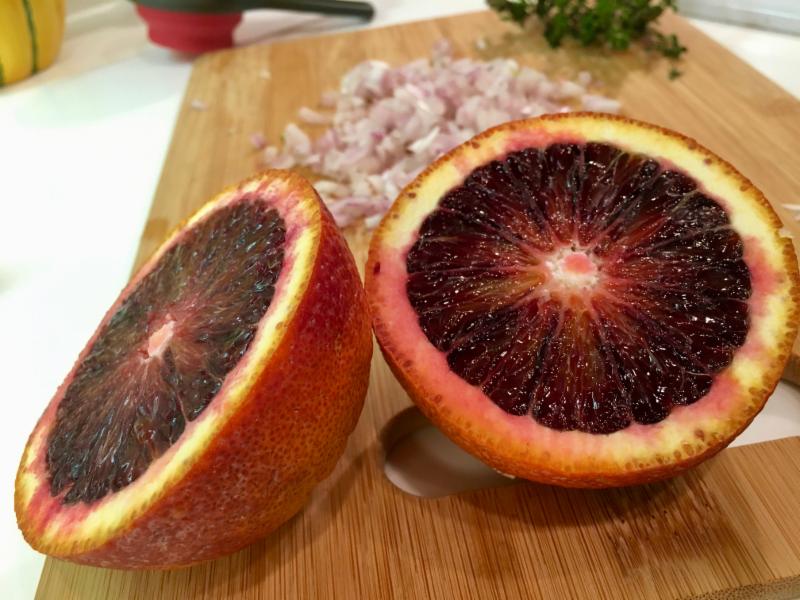 PS…I made a new YouTube cooking video for chicken with blood orange, shallots and thyme. She’s a-so nice! Here it is, Free for All Slim People:
https://youtu.be/PlqUugkf_ik