Hello You Good-Looking Slim People!
You might have heard of a chef named Bobby Flay.
Did you know he has a sister named Sue?
How are you SlimSational Slim Folks? Everybody fine and dandy out there?
Just want to remind all you NoCal Slim Pals that we will be in Santa Rosa, California, on Thursday, August 9th, for a Big Show at Montgomery Village.
And then we’re heading to Lodi for a show at Watts Winery on Saturday afternoon, the 11th.
Greg Vail is playing sax on both dates. He has a month off of touring with Super-Duper Singing Star Luis Miguel, and Greg’s gonna slum it and do some Slim Shows! Slum it with Slim!
Check out all the Slim Shows coming up…
https://slimman.com/shows/
We’re playing two gigs in Laguna Beach at the Festival of Arts in August; we’re doing a 16-piece big band Rat Pack extravaganza in Modesto on September 1st.
Come on out and see the band. The show we did last week in San Antonio was one of the best ever. Thank you, Alamo City. God Bless Texas!
And Now The Newest News From The Slim Shack

I went to the dentist last week for a check-up. My horse teeth have been doing pretty well for quite some time, but Dr. Yankenpull told me I needed 2 root canals. Seriously. I asked him if we could do them both at the same time.
I mean, if the car’s in the shop, why not get everything fixed?
He raised an eyebrow, but I told him I could handle it. He sat me back in the chair, numbed me up, and I was pleasantly surprised to see he still had the TV installed in the ceiling.
Nice! I watched a show called (I think) “Australia’s Favorite House”, kinda like “American Idol”, but for houses. So Dr. Yankenpull drilled away for about 2 hours. After he was done, he took some x-rays. The two teeth he did looked great. But…
He discovered a third tooth that needed a root canal. He took out a small magnifying camera the size of a pen, stuck it in my mouth and we watched on a monitor as he showed me the tooth and what was wrong…
Slim People. If any dentist offers to show you a close-up of your back molars, don’t do it.
It looked like the surface of the moon back there! I expected Neil Armstrong to walk into the frame. I told Dr. Yankenpull to do the third root canal. Maybe I could get a deal…buy two, get one free?
Plus, I wanted to see which house won Australia’s Favorite House.
So he numbed me up again and went to work. I was numb from my chin to my eyebrows. You could have pierced my nose with a bone and I wouldn’t have felt a thing. He finished, put on three temporary crowns, and I went back to the Slim Shack.
I was dehydrated. I tried to take a drink of water through a straw. My lips were so numb I couldn’t get them around the straw. Water just drizzled down my chin.
The numbness had worn off by the time I took my flight to San Antonio…a couple days later!
I flew in, went right to the hotel, and walked across the driveway to the Wonderland of Americas Mall. As I passed by the outdoor fountain, I noticed that people had already started setting up chairs for Friday’s show, and it was only Wednesday. 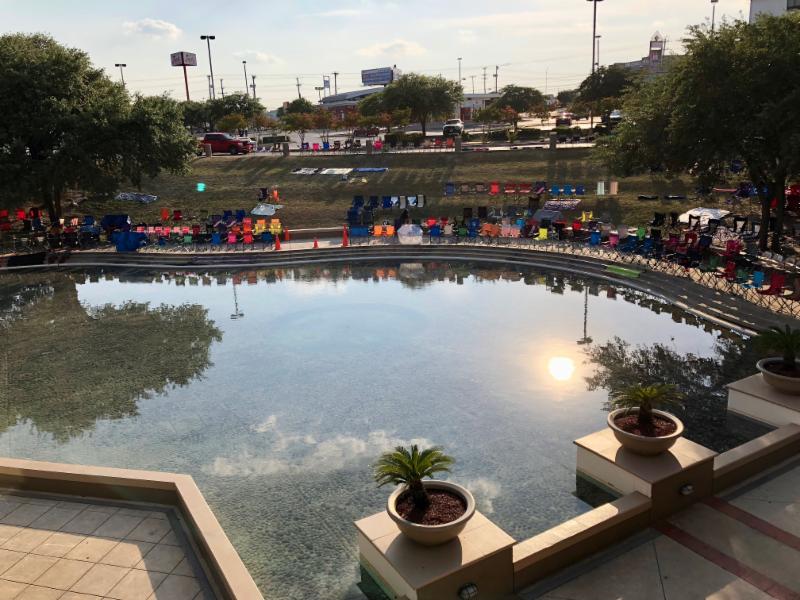 Rehearsal was in a small room on the lower level; the whole band was there. We rehearsed for hours. I must admit, it sounded and felt really good.
When we finished, I walked back to the hotel; I was exhausted and went right to bed.
I don’t think I moved once because when I got up the next morning at 6 AM, I looked in the mirror and had a pillow crease on my cheek that looked like a scar from a sword fight.
But that’s why you get up at 6 for a 10 AM show…so all the swelling can settle down so when you walk on the set you don’t look like you were swashbuckling all night with Captain Jack Sparrow.
The TV show was “San Antonio Living”. I’ve done the show before; my favorite was when I went on after a two-headed turtle. Seriously.
“And next, we have a two-headed turtle and jazz singer Slim Man!” 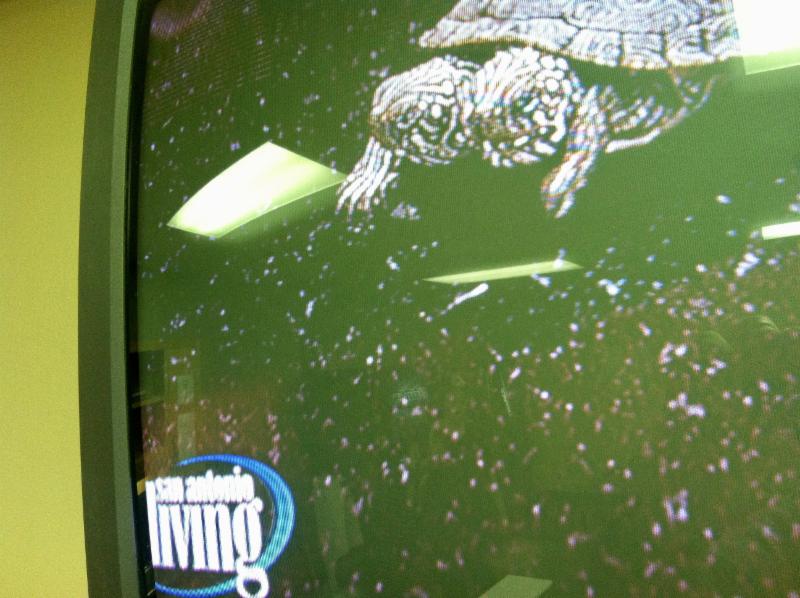 There was no two-headed turtle this time. But the mayor was on with me! The next day, I did another AM TV show, Great Day S.A. Great Day, indeed!
After that, I went to soundcheck. They had constructed a huge stage outside the mall. There was a large pond in front of the stage, and a natural amphitheater around the edge of the pond. The band sounded ridiculously good. Again! And it was only soundcheck.
After rehearsal, I got a sandwich and walked back to the hotel. I looked out the window, at the crowd below. 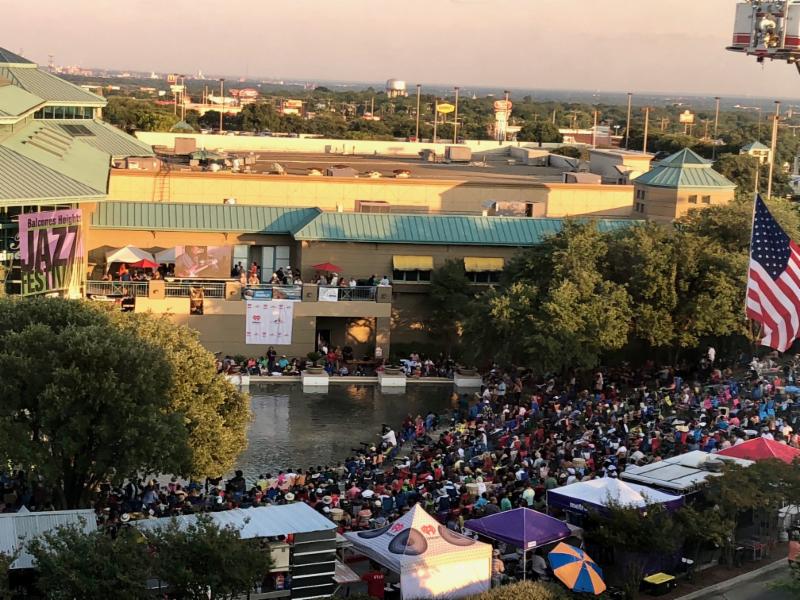 I was famished. I took a bite into the sandwich, and…one of the temporary crowns came off. I went to the mirror, tooth in hand, and smiled.
It wasn’t my best look. A missing tooth rarely is. What to do?
I walked across the street to a Super Target and went to the pharmacy. The pharmacist was about 20 feet away, and wouldn’t come over. So I had to scream…
“MY CROWN FELL OUT! DO YOU HAVE ANY TOOTH CEMENT!  ANYTHING?” She told me they might have something over by the toothpaste, and waved me away.
Thanks. Big help, Your Highness.
I finally found some Polident, stuff used to hold dentures in place, and walked back to the hotel, box in hand. I was standing by the elevator when the manager, an attractive young woman, came up to me.
“Mr. Man! So nice to have you here! How’s your stay?”
Then she looked down at the Polident box and back up at me. I was going to explain, but luckily the elevator doors opened up.
I went up to the room, glued my crown back in place, and said a prayer to the Tooth Fairy that it wouldn’t fly out of my mouth while I was singing and land in the pond.
It didn’t. 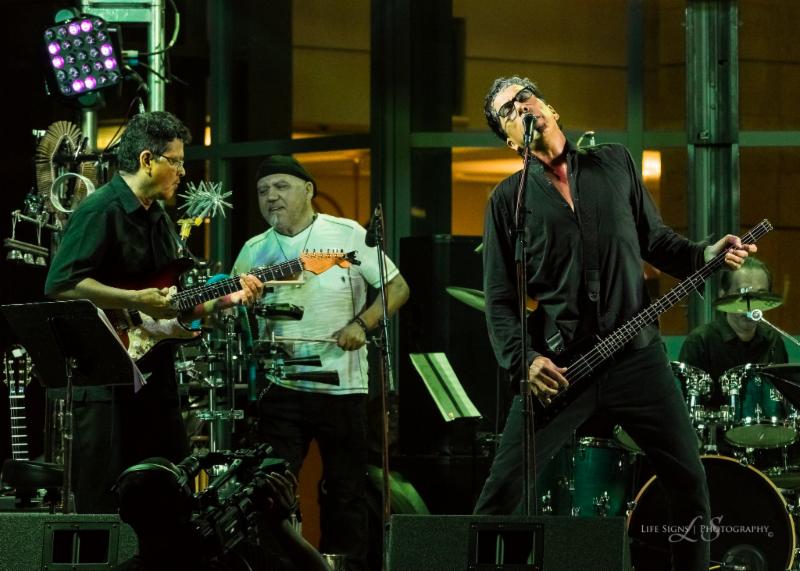 As a matter of fact, I didn’t even think about it for the whole show. The band was blazing. We had Eric Casillas and Gabe Herrera on percussion, Renee Hernandez on drums, Bill Parsons played piano, Roger Tamez played sax and trumpet and keyboards, Billy Staggs played guitar, and Wednesday Ball sang backups; she killed.
They had two huge video screens on the sides of the stage, up on the second level. Joseph Vincelli, who opened the show, came up and played sax for the last few songs. He’s excellent. 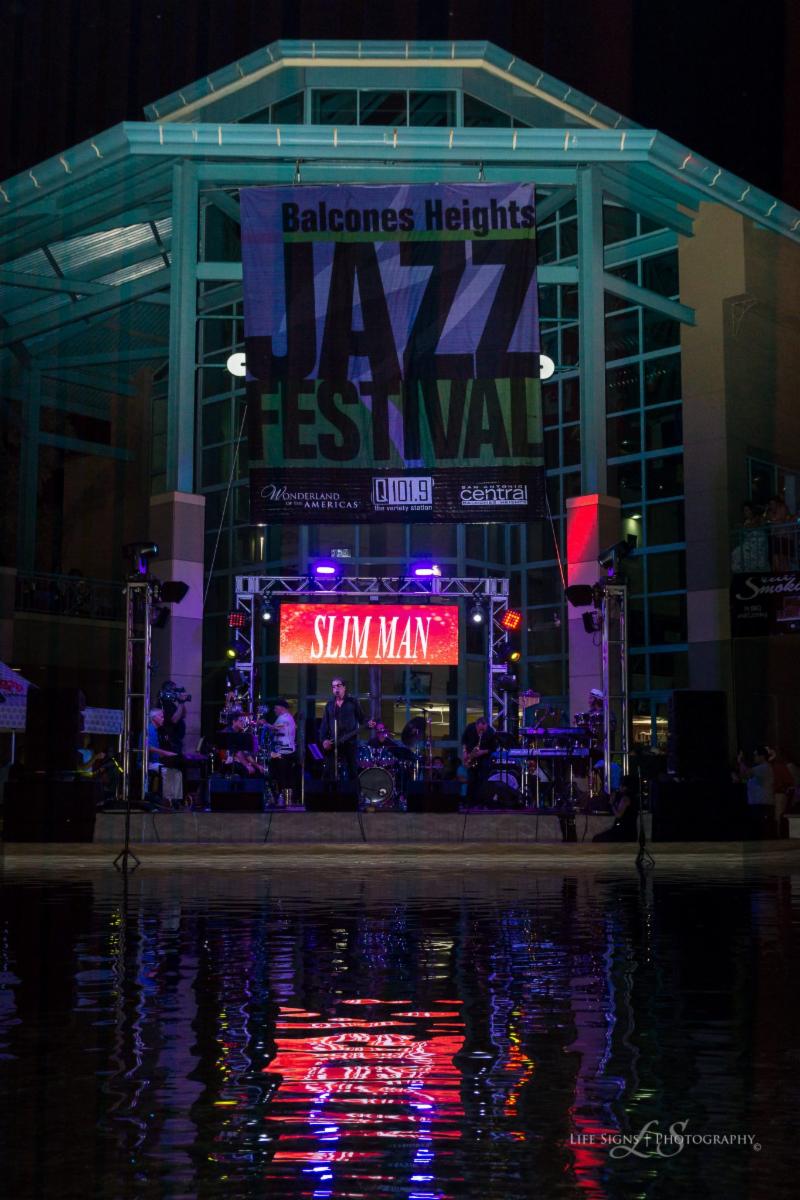 The lights, the sound, the band, the town…It was one of the best Slim Shows ever. Seriously. I had such a great time. When it was over I felt like I had won the Super Bowl.
And my tooth was still in place.
Keep smiling, Slim People. Unless you’ve just lost a tooth.
Who loves ya? 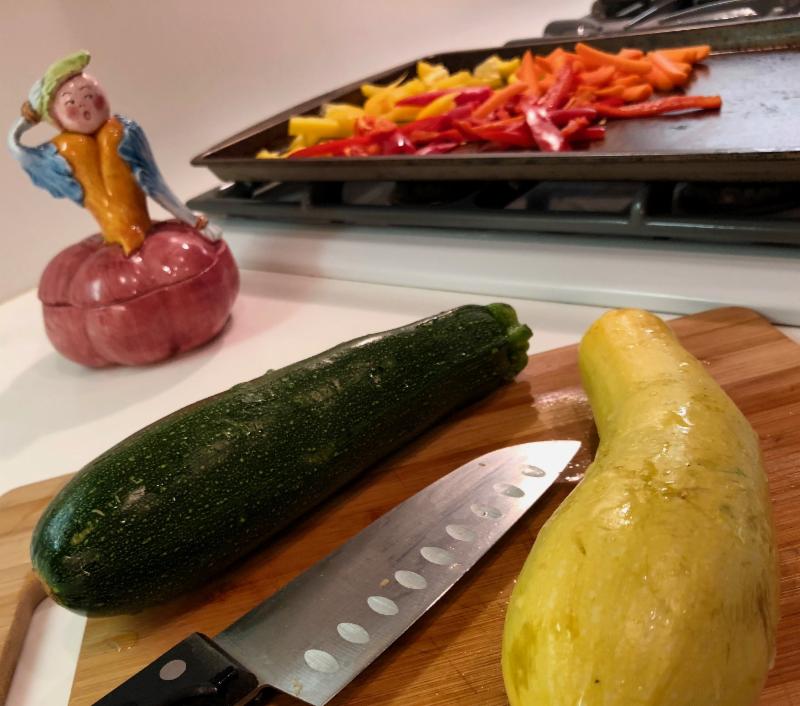 I made a new video for the Primavera sauce, which is basically delectably delicious roasted vegetables. Quick, easy, healthy, and Free for all Slim People:
https://slimmancooks.com/?p=4527