Slimmest of All People,
My niece wants to get married. She asked me for some advice. I told her not to marry a tennis player.
Because love means nothing to them.
How are the Slim Ones? It’s me, your Uncle Slimmy, checking in to make sure everyone is fine and dandy.
I’m not sure if you read the headlines in the New York Times (maybe it was Mad Magazine), but I’ve been nominated for Best Jazz Vocalist at the Coachella Music Awards.
Now, I’m not encouraging you to vote for me. It’s your civic duty to check out all the candidates and see what they’re about.
And then vote for me!
I’m not sure when the voting closes, but here is a link, we’re on page 8:
http://coachellavalleyweekly.com/2018-cv-music-awards/
If I win, I promise to serve All Slim People a heaping helping of pasta.
Unless you’re gluten-free. Or low-carb.
I’m low-carb…I eat my spaghetti while laying on the floor.
We’ve got some SlimSational Slim Shows coming up.
Baltimore (new!), Wisconsin, Bel Air (Herb Alpert’s club in Beverly Hills!), San Antonio, and more!
All details are on the website:
https://slimman.com
And thanks to all who have been coming out to Vicky’s in Palm Springs. Last week was one of the best-ever Slim Shows.
We’re back again this Wednesday. Gonna be fun.
Here Be the New News from the Slim Shack

Right before I sent my last newsletter out, I had a feeling in my gut that I was gonna get tickets to Coachella. Now, there was no logical reason for me to believe that. I looked on the web for tickets and they were a couple hundred bucks.
Count McCoynes, our Slim Minister of Finance here at the Slim Shack, told me it wasn’t in the budget. He blamed Selma Krapoff, our Head of Slim Merch, for a lack of sales, who in turn blamed our Head of Publicity, Kenny B. Morpoplar, for not getting the word out.
Whatever. It didn’t look good.
But something told me I was gonna snag some free tickets. Friday came and went. Nothing. Same thing Saturday. So much for my incredible instincts.
Sunday rolls around, it’s the last day of Coachella, the concert is half-finished, and out of the blue, VIP tickets fell in my lap. For free. But I had to hose off and get cracking because it was late in the day.
I walked to Coachella. It took about 25 minutes; it would have taken the same amount of time to drive and park.
I like walking. You don’t see a lot of pedestrians in California. It’s a car culture out here. Even if you’re going to your neighbor’s across the street, you take your car.
Nobody walks out here.
When motorists see a pedestrian approaching an intersection, they stop and marvel. They wave you through. I used to think they were just being really polite, but now I know that they’re in shock.
They’re not used to seeing anybody walking.
I only saw only a few people walking to Coachella, a festival that draws about 100,000 people. 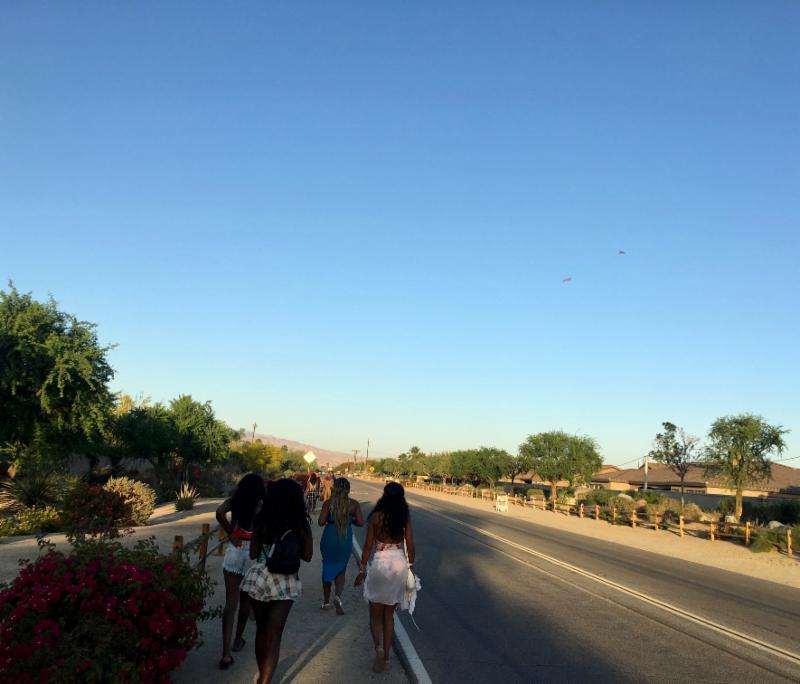 Getting in wasn’t a real problem. You put your wristband over a scanner, and it lights up green if you’re registered, and you walk through.
Then there’s a security person who checks through your bags and coat. I wore a jacket. Why? Yes, it was warm, in the 90s.
I took my jacket because I needed a place to stash my stuff. Like what? Well, I took a small pair of binoculars. Seriously. I took some Advil and some Tums, which came in handy after I ate a vegan burrito ($15) the size of a small football.
My handkerchief came in handy, too. A lot of people were wearing them over their mouths and noses, tied behind their heads, like bank-robbing cowboys, because the dust and sand were kicking up fierce.
And I brought some band-aids, because you never know if some young person might get one of their piercings snagged on a passing tree branch.
The crowd was mostly people in their 20s and 30s, a wide mix of folks, and I must say everyone was really well-behaved…nobody staggering around drunk, nobody banging into Tiki torches and setting their hair on fire.
But the thing that really surprised me was the art exhibits. There were these huge, amazing sculptures placed around the polo grounds. 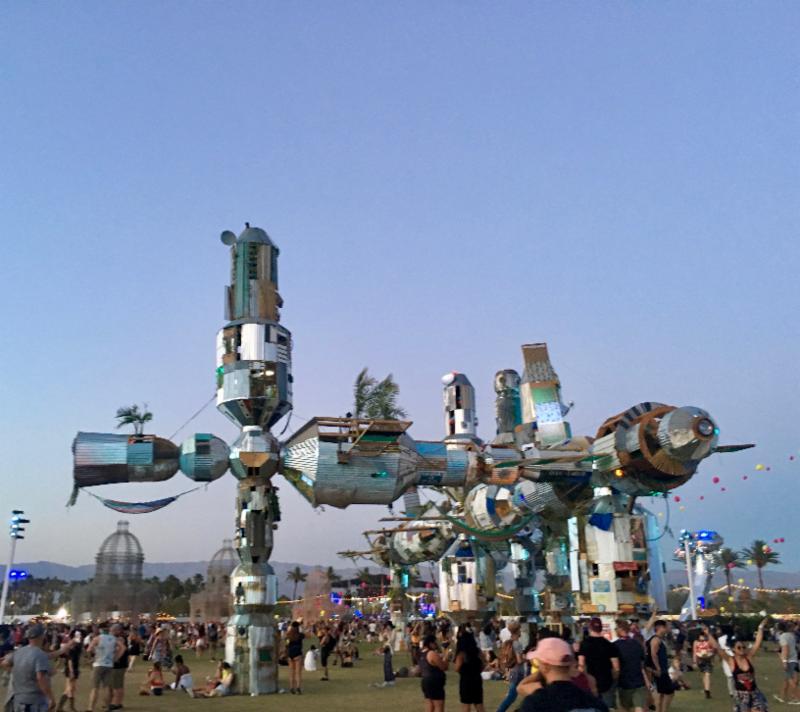 There was a large seven-story cylinder with ramps inside where people could walk. The cylinder changed colors, gradually. 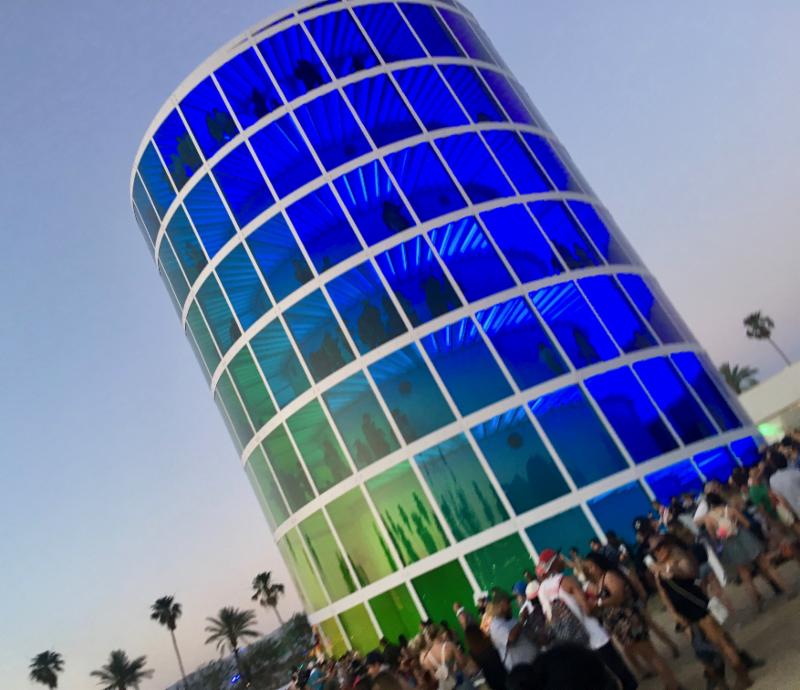 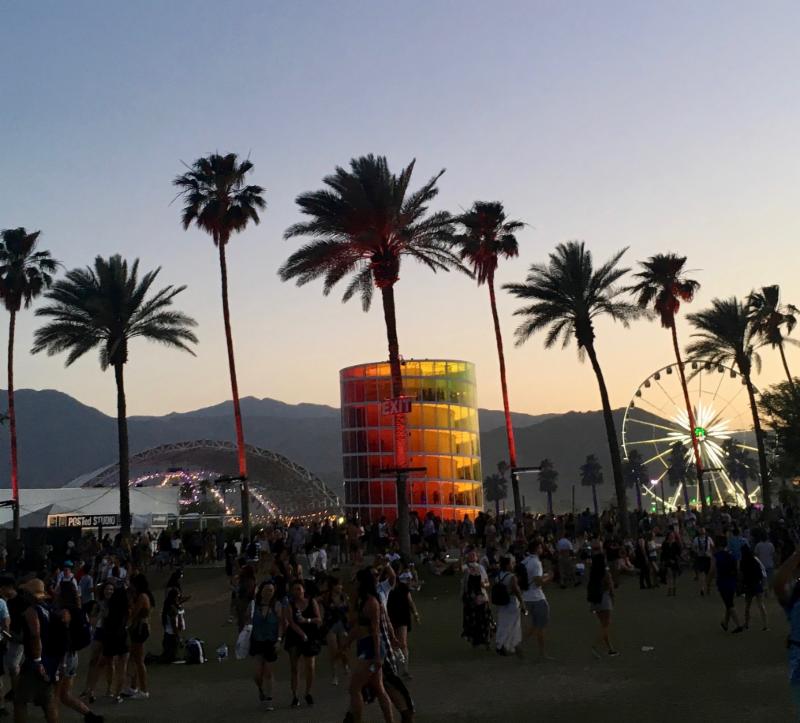 I went to see Kamasi Washington, a jazz sax player that’s been creating a lot of buzz. He was on a side stage with a large band, and a string section, and he was playing music that was…a real challenge.
A real challenge to play, and a real challenge to listen to.
Then a band called Odesza came on the main stage. I wasn’t real familiar with their music. There were a couple guys singing on stage, then a girl joined in.
The music was electronic, a lot of synths and percussion. The light show was truly amazing, but the crowd seemed disconnected. There was no fist-pumping, no one was singing along. No mosh pit!
Then, Eminem came out. He was wearing a red knit cap that came down to his eyebrows, and a hooded sweatshirt pulled down over his face.
Even though I was looking through binoculars, it could have been Eminem or it could have been Emma Thompson.
The crowd didn’t seem too enthusiastic. Yes, it was the last night of a long weekend in the desert. But a lot of folks headed for the exits.
I walked back to the Slim Shack. I was hoping that some band would have grabbed me, that some song would have had me singing all the way home, but nothing got to me.
Except the vegan burrito the size of a football. That stayed with me.
Keep in touch, Slim People. And keep smiling.
It’s all about love.
Who loves ya?
Uncle Slimmy