Slimmest of All People,
I walked into a bar last week, ordered five glasses of wine, and drank them all down in five minutes.
The bartender asked me why I was drinking so fast.
I told him, “If you had what I have, you’d drink fast, too.”
He asked me, “What do you have?”
I said, “Two dollars.”
Happy Fourth of July, SlimStones! Everybody good?
The night before I left for Wisconsin I could not sleep.
So I did what you’re supposed to do.
I stared at my iPhone for a few hours. I looked at videos on YouTube.
There was a guy who had made a fortune, lost it, and made a fortune again. He gave the secret of his success…
Every morning he makes a list of 10 ways to make money.
He must not be in the music biz!
The next morning, I left the Slim Shack at 10 AM. I caught an Uber to Palm Springs airport, took a plane to Salt Lake City, took another plane to Minneapolis, then yet another plane to Rhinelander, Wisconsin.
Then, it was a 45-minute drive under a full moon along a narrow, winding road through the woods. I arrived at a cottage; a really small one-story place, probably built in the 50s.
The 1850s.
If you were a location scout and wanted a place to film a horror movie, this would be perfect. It was midnight; I was so tired, I fell asleep on top of a small bed with my jog clothes on.
The next morning, I took a look out the bedroom window. The sun was shining down on a beautiful lake. Bass Lake.  I walked out and went down to the pier. There was an old wood rowboat; I got in and rowed across the lake and back. 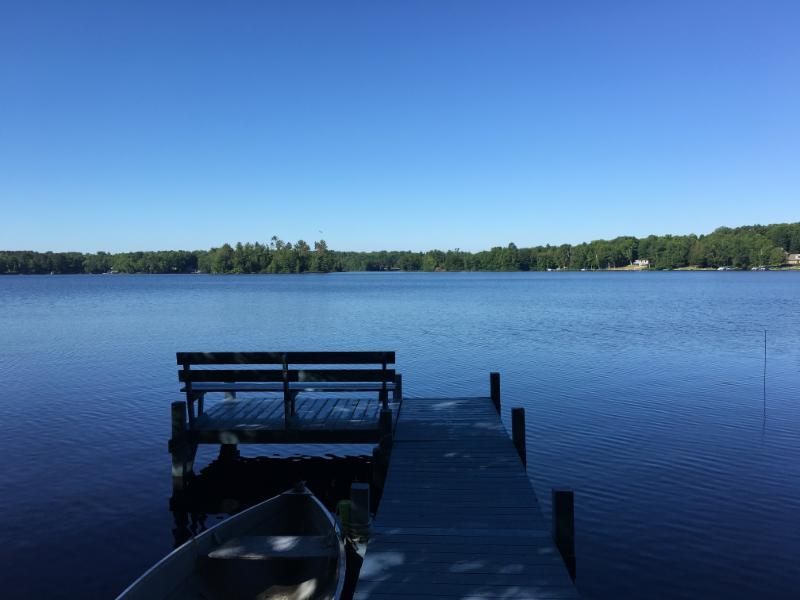 It took me about an hour. The water was calm, there was a light breeze, it was maybe 70 degrees, and she was a-so nice! After the row, I took a walk/jog.
I eventually arrived at a golf course, there was a huge tent at the 18thhole. I was guessing this was where the concert was gonna be. I walked back to the cottage, and it was boiling hot inside, with no air-conditioner. I opened all the windows and the small front door.
After about a half-hour, I heard a voice, “YOU GOTTA KEEP THIS DOOR CLOSED!”
There was an old white guy at the front door. I got nothing against old white guys, I’m just describing what I saw.
He said, “If you keep this door open, squirrels and chipmunks are gonna sneak in and tear this place to pieces.”
Now, I’ve never heard about any house-shredding chipmunks before, but maybe there was a special breed that lived by Bass Lake. I closed the door.
That night, the promoter and the keyboard player took me out to dinner, a small neighborhood bar not far away. The waitress brought over the menu; on one side it said:
DEEP FRIED.
Underneath was a list of about a dozen things; at the top was cheese curds, a Wisconsin delicacy. 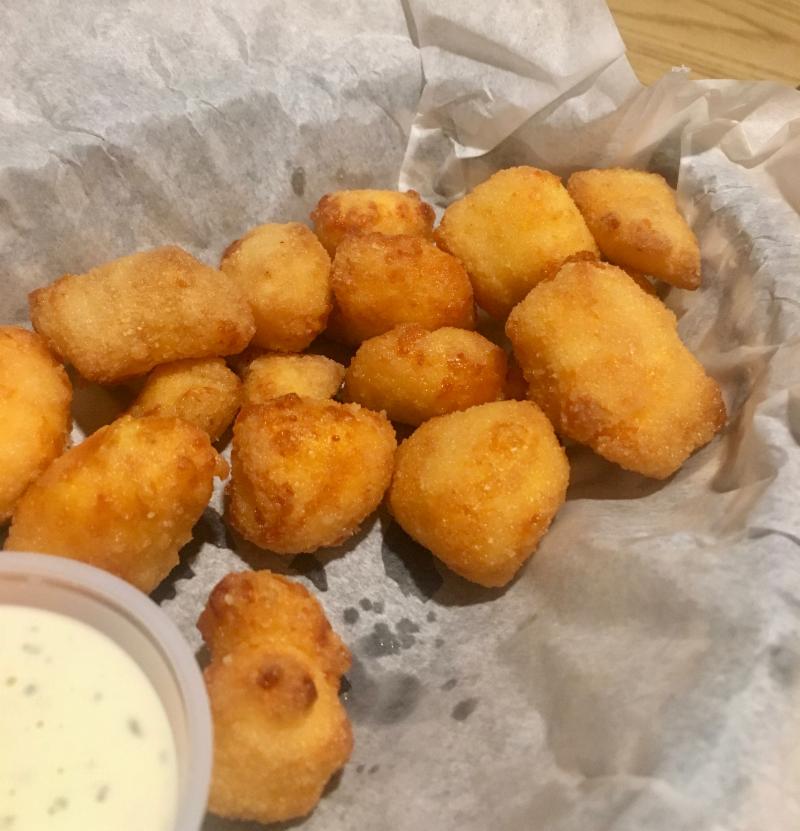 I ordered some. When in Rome, do as the Romans do. I hate to admit this, but I ate almost the whole basket, which isn’t a smart thing to do when your name is Slim Man and you’re eating in front of people you don’t know that well.
That night, I woke up around 2 AM, sat bolt upright in bed. I think the deep-fried cheese curds were waging war in my stomach. It was a Curdish War!
I couldn’t get back to sleep. I started thinking about what the old guy said about the killer chipmunks. I got out of bed, and went from room to room, turned on the lights, looked around.
I didn’t want some rabid squirrel attacking me in bed and gnawing my ear off in the middle of the night.
On the tiny coffee table was a loose-leaf binder; inside were instructions for renters, info about the water heater, recycling, and whatnot. On the last page was…
“Don’t take the garbage out unless it’s garbage night, because bears will get into it.”
Bears. I’m pretty sure they didn’t mean the Chicago Bears. Killer chipmunks, rabid squirrels, and now bears.
It was no wonder I couldn’t get back to sleep. About 5 AM, I dozed off.
Two hours later, I heard a noise that sounded like a jumbo jet had just landed on my head. I peeked out the bedroom window.
A frontloader was driving down the gravel driveway, crossing right in front of the window. He cleared the cottage by about a foot, seriously, and started dumping load after load of stones into the driveway next door, which was about 10 feet away.
I closed all the windows. The cottage got so hot you could’ve smoked meat in there.
The show that night at the golf course was…the temperature was in the 90s, and so was the humidity. It was sticky hot. I played for 90 minutes.
The drummer did a great job, and the keyboard player, a young blonde gal, played amazingly well. I felt bad for her, though. She was really sweating. We all were.
My shirt was soaked through. So were my pants.
The people in the audience deserved medals. Or at least some ice packs…
After the show, I went back to the cottage. I took off my shoes, and there were (seriously) puddles of sweat in the bottom. I took off my clothes, took a cold shower, put on a nylon bathing suit, and laid down on the bed.
I would have laid on the bed naked, but I was afraid a bear might bust in and I’d have to jump out the window and run ass-naked around Bass Lake.
The cottage got hotter. I opened all the windows, but there was no breeze. I found two old fans, put one in each corner, turned them on full blast, and pointed them at me. I still couldn’t cool down. 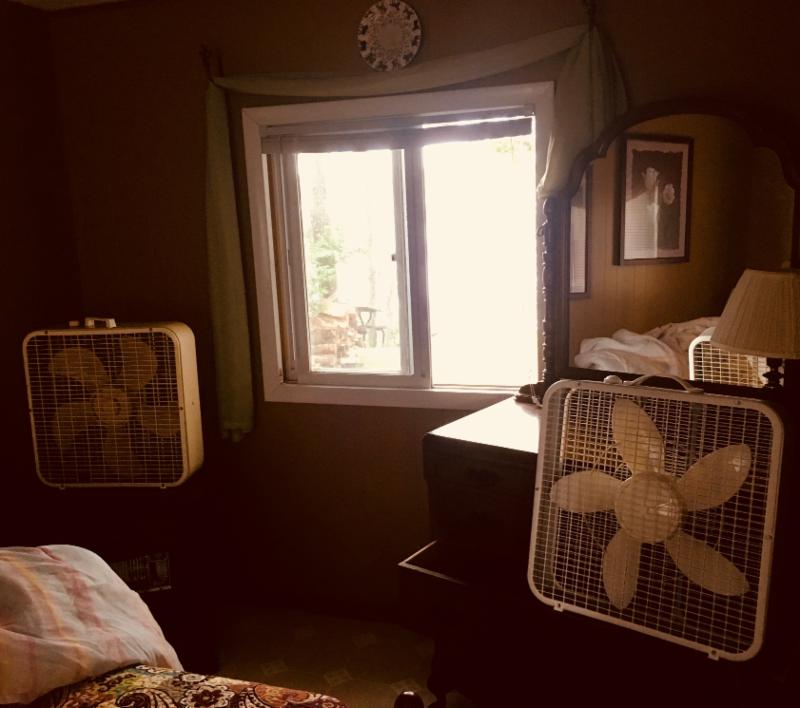 I finally got to sleep around 3 AM. At around 8, I swear to goodness…
A guy started mowing the lawn, right outside my window. He was circling the cottage.
I decided to go to the airport. I was a few hours early, but at least it was air-conditioned. And quiet.
I flew from Rhinelander back to Minneapolis. I boarded the next plane and…I was in first class.
She’s a-so nice!
There I was, sitting in a huge comfy chair the size of a throne, and I felt like a king. The attendant asked me if I wanted a drink.
Are you serious? Bring King Slim a goblet of wine! I had a glass, we took off, and then she asked me if I wanted another glass.
Why not? I wasn’t flying the plane. It was Saturday night. I had another glass, then she brought out dinner, shrimp in some kinda corn relish thing.
I got to Salt Lake City, boarded another plane and… first class again. Thank you, Wisconsin! I had another glass of wine; they served it in real glasses; it was pretty damn good.
When we arrived at Palm Springs, I went to baggage claim and my two bags were the first to come out. How lucky can one guy be?
I Ubered back to the Slim Shack, unpacked, and decided to have a glass of champagne.
It wasn’t the greatest decision I’ve ever made.
Sunday morning my mouth felt like two small birds had made a nest in there. My head felt like someone had used it as a bowling ball.
I started thinking about the YouTube money guy who suggested making a list of 10 money-making ideas first thing every morning.
I thought of one.
Design a T-shirt. On the front of it, put…
Drink Wisconsibly.
Big thanks to all the cheeseheads who came out to the show, to the band, and to everyone who made it possible. We raised a lot of money for a well-deserving charity.
And thanks to Don and Judy, who came all the way from Minneapolis.
Keep smiling, Slimigos. And keep in touch.
Who loves ya?