Hello You Good-Looking Slim People,
If you’re looking for something to do tomorrow, may I suggest a Slim Show?
Not only is it a Slim Show, it’s a benefit as well. So you can boogie down and support a good cause at the same time.
Even if you’re nowhere near San Juan Capistrano, California, you could probably make the show.
For instance, if you lived in Baltimore, and drove 3,000 miles an hour, you could be here in an hour.
So there’s no excuse! Greg Vail on sax, Craig Chesnut on drums, Tateng Katindig on keys, and The Slim One on bagpipes. 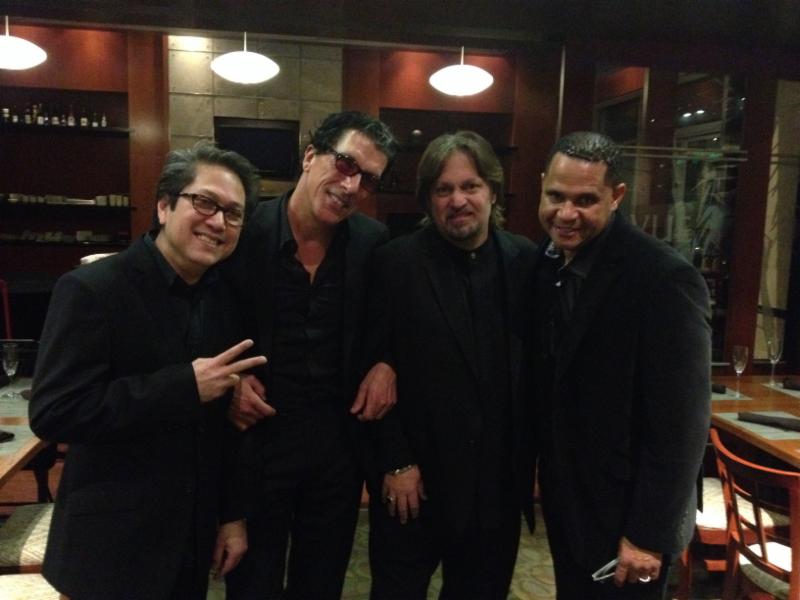 All details are down below.
Here’s an excerpt from the new cookbook, which should be out in a few years…
Slim Man Cooks Greco-Italian Kickin’ Chicken
There has been a long-standing feud between the Italians and the Greeks. It’s not a fist-fighting, gun slinging kinda feud, just a little rift going on. The Italians think they were the cradle of civilization. The Greeks claim the same.
There’s a joke that kinda sums it up…
A Greek and an Italian are sitting in a café, arguing about which culture was more cultured.
The Greek says, “We built the Acropolis!”
The Italian says, “Yes, but we built the Roman Empire.”
The Greek says, “We came up with advanced mathematics.”
And the Italian says, “Yes, but we invented indoor plumbing.”
The Greek thinks and then says, “We invented sex!”
And the Italian says, “Yes, but the Italians invented sex between a man and a woman.” 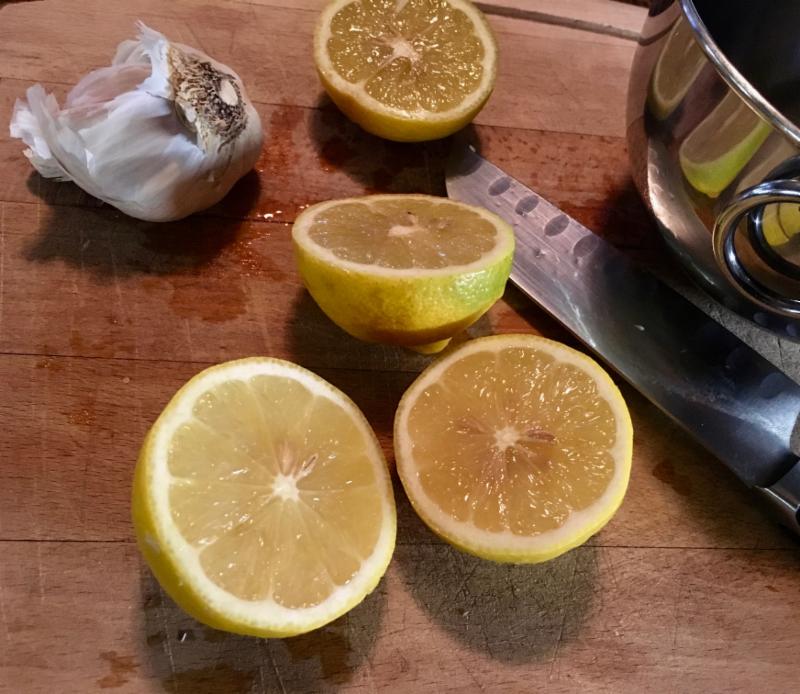 This dish has a lot of ingredients that are familiar to both Greek and Italian cuisines…lemon, oregano, garlic, and olive oil. Is it Greek or Italian?
I guess that depends on who’s cooking it.
When I was living in Baltimore, Maryland, a Greek restaurant opened right down the street, on York Road in a neighborhood called Govans. I went there right when they opened the doors, and I had this oregano chicken dish, and it was one of the best things I’d ever tasted.
I told the owner, a lovely Greek woman, exactly that. My Mom was with me, and after dinner, she called a friend of hers at the newspaper, a food columnist, who went to the restaurant, gave it a great review, and told the owner how she’d found the place.
The restaurant suddenly got incredibly popular. Lines out the door.
Every time I’d walk in the place the owner treated me like some kinda Mafia boss. She’d never let me or my Mom pay. And I was thinking about this restaurant as I was staring at some chicken thighs.
Slim People, don’t get me wrong…I don’t stand around all day staring at chicken thighs. I was just taking a quick look and trying to figure out how to cook ’em.
So I thought I’d try and re-create the recipe. I grabbed the usual suspects…olive oil, garlic, lemon, and oregano…and mixed them up with the chicken, and baked it. It was really delizioso and simple and most eccellente. Greek or Italian, this dish was delish!
Now, in that Greek restaurant, they served this dish with roasted red potatoes, if my memory serves me correctly. It would be a great side dish, for sure. Either that or some risotto. 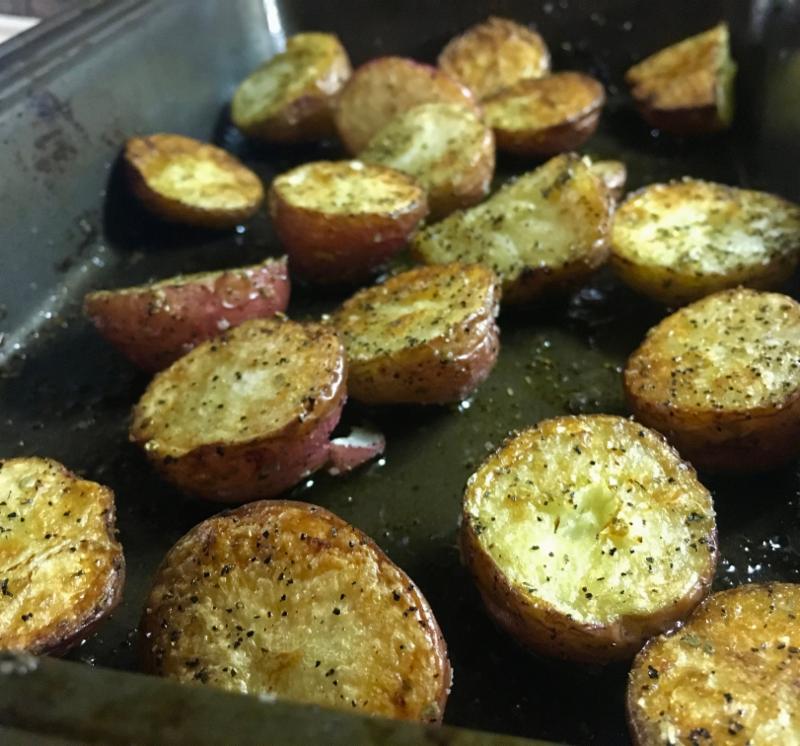 I cooked this dish two ways…the first time I used boneless, skinless chicken thighs. Why?
I was cooking for 4 Lady Peoples. And they didn’t want no skin. A few years ago, I might have put up a fight. But these days I’ve learned that you gots to keep the ladies happy. Because if the ladies ain’t happy, you, my Man Friends, will not be happy.
So I made this dish without skin and bones. It was good. The Girly-Girls really liked it.
But…but what?
I wanted to try it with the bone in, the skin on. That’s the way they served it at that Greek restaurant in Baltimore. So last night, as I was dog-sitting for my friends in Carlsbad, Californy, I got some chicken thighs, bone-in, skin-on. The Manly Way!
I went to Gelson’s, which is this ridiculously expensive grocery store down the street, and asked the woman behind the counter to help me search for what I needed.
She found some organic, free-range, cage-free chicken that came from a good family, had a wonderful life, and passed away peacefully in its sleep.
I went back to the Carlsbad Casa and baked the chicken thighs and Slim People…they were, really, really good. I would say “Great!” but I’m laying off the superlatives these days. And the exclamation points.
But the skin-on, bone-in, chicken thighs were far superior to the skinless, boneless variety. Exquisite.
But what the hell do I know?
NOTES:
When you pour the leftover marinade on top of the chicken, make sure there are no garlic cloves on top of the chicken. They’ll burn, and burnt garlic tastes nasty. And the skin won’t brown where the garlic has been.
I didn’t baste the chicken. I just put it in the oven and let it bake.
I’ve been using a thermometer a lot these days to make sure things are done and not overcooked. If you use a thermometer, don’t use the one you use on your infant. Or your dog. Use a meat thermometer, they sell them in most grocery stores.
You can marinate the chicken for up to 24 hours. Except that requires a little too much pre-planning for The Slim One, so I just let it marinate for about a half-hour. Turned out great!
My friend Hit Man Howie Z won’t eat dark meat. He doesn’t know what he’s missing! If you want to use chicken breasts, they will probably take less time. This is where your thermometer comes in handy. Not for Howie. For the chicken. 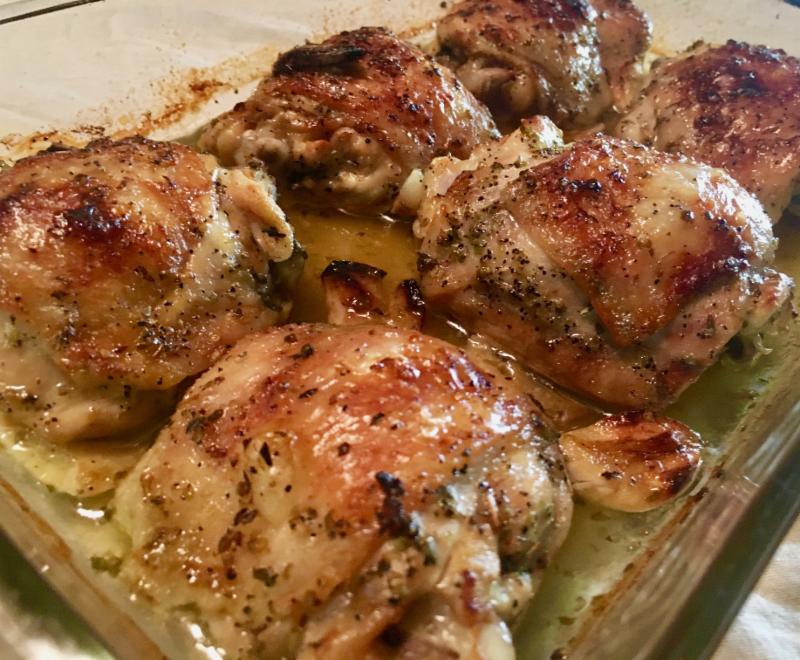 Here goes…
INGREDIENTS
¼ cup olive oil
¼ cup freshly squeezed lemon juice (2 lemons, Meyer are best)
4 cloves garlic, smashed and peeled and sliced
2 teaspoons oregano
Kosher salt to taste (I used about ½ teaspoon)
Freshly cracked black pepper to taste (I used about ½ teaspoon)
6 chicken thighs (about 2 pounds)
Put everything except the chicken in a large bowl. Whisk it up, mix it up, stir it up.
Add the chicken, mix it up, stir it up, cover and put it in the fridg and let it marinate for up to 24 hours.
Turn the oven to 425 degrees.
When it comes to temperature, put the chicken…skin side up, if you’re doing the skin thing…in a baking dish, and pour the marinade on top.
Put the chicken in the oven and let it bake for 40 to 50 minutes, or until the internal temperature reaches 175 degrees. The tops of the chicken need to be brown.
If they ain’t, put them under the broiler for A MINUTE OR TWO! 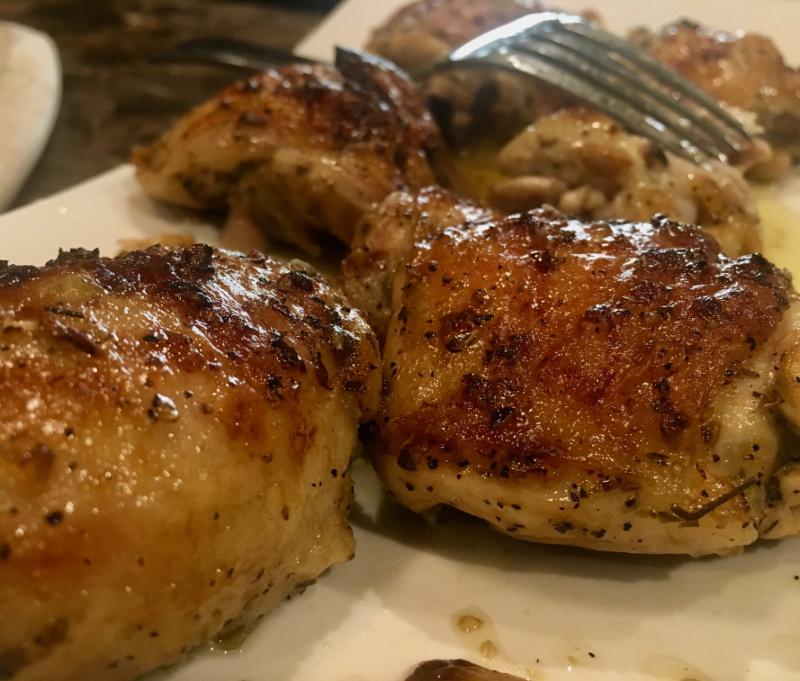 Take the chicken out of the oven, put some on a nice plate, maybe serve with some roasted red potatoes or some warm, crusty bread, and…
MANGIAMO!
Enjoy, Slim People.
Who loves ya?
Uncle Slimmy