Dearest Slim Dudes and Babes,
We’ve got the Slim Cooking Class this Saturday, June 18th, at Kitchen Kitchen in Indian Wells, CA, right outside of Palm Springs. Mr. Man is gonna teach you how to make potato and leek soup, Caesar salad, and chicken Marsala. Did we mention he’s gonna sing, too? Get your tickets right here:
slimmancooksatkitchenkitchen
Father’s Day is Sunday.
Instead of giving Pops another tattoo, why not get him a Slim Man Cooks cookbook?
It’s not as painful, and can be easily removed!
Priority shipping is free. Order it right here, get it in time for Father’s Day:
https://slimman.com
I’ve included an abbreviated excerpt from the cookbook down below. It’s a true story about my Dad and his first cellphone. It’s got some foul language, but that’s the way my Dad talked.
The recipe is for Broccoli and Peppers.
Happy Father’s Day. Enjoy!
Who loves ya?
Uncle Slimmy
Broccoli and Peppers with Naked Women
When my dad found his dream spot on top of a mountain in the Catskills in upstate New York, there was nothing there but an empty cinder block garage with a dirt floor and an incredible view. 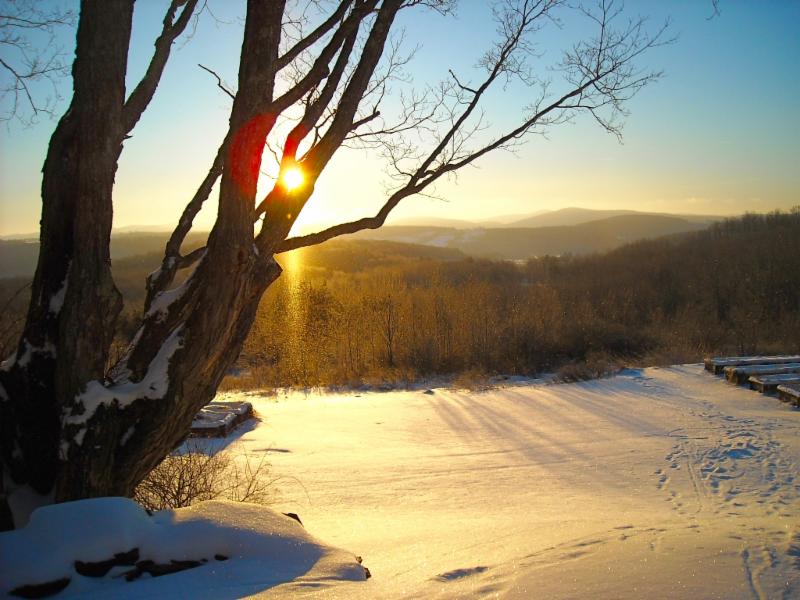 No electricity, no running water, no phone, no nothin’.
My dad took that garage and slowly built it into quite a nice cabin.
It took years. He loved the place. So did I. So did Batu.
The place was called Rat Tail Ridge. Summers were magnificent. Winters were brutal. There was so much snow on his roof in the wintertime that my dad had to get somebody to climb up and shovel it off so it wouldn’t cave in. 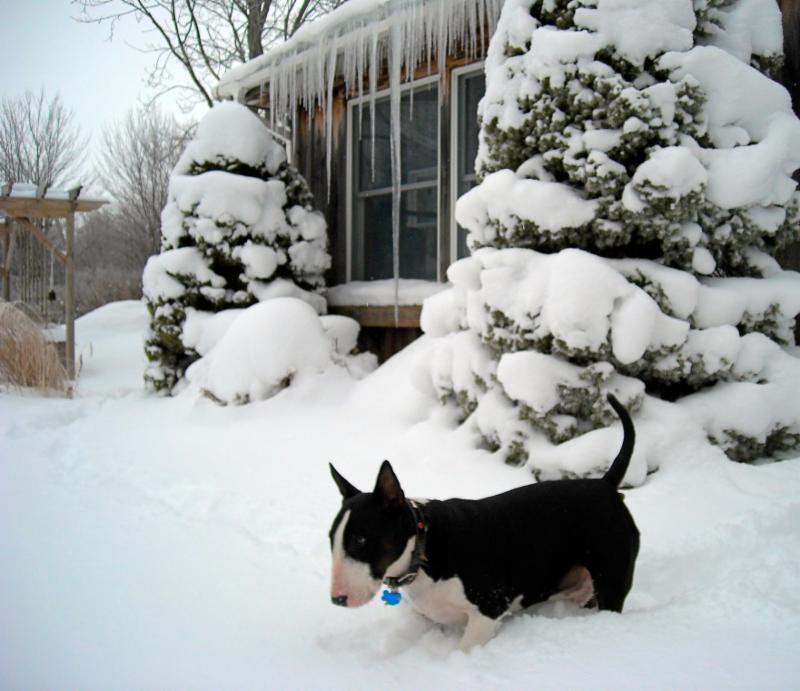 In the morning, my dad liked to drive into Meridale to the tiny post office, get his mail, and talk with the woman behind the counter. Then he’d grab the New York Times at the small coffee shop next door and drive back to Rat Tail Ridge.
Most old people drive slow. Not my dad. He drove like he’d just robbed a 7-11.
I used to jog from his house down the side of the mountain, and I could see him a mile away, tearing up the dirt road in his Subaru wagon, a cloud of dust billowing behind him.
I would dive off the side of the road, afraid he wouldn’t see me and run me over. He’d fly by without recognizing me, his head barely visible above the steering wheel. One time he drove into a snow bank and got stuck there for a while. That was when I decided it was time to get him a cell phone.
I got him in my car, and we drove down to the AT&T store in Oneonta. The drive is about forty minutes. He wasn’t pleased with the idea of getting a cell phone; it was like driving someone to get their arm amputated.
AT&T is the only carrier that works up at my dad’s place. When we got to the store, my dad wasn’t happy at all. Keep in mind; he wasn’t a happy guy to begin with. We went up to the counter, a sales guy came over–a young kid, friendly, and clean-cut.
I told him what I wanted . . .
A cell phone. One with big numbers. One that was easy to operate. I didn’t need it to make movies. I didn’t need it to tune a guitar. I didn’t need a phone that was also a microwave oven.
I just wanted a simple phone for my dad for emergencies and stuff like that. Maybe a phone call from the kids every once in a while. I thought that would be nice for the old grouch.
The sales guy looked at me and then looked at my dad. He cheerfully asked us if we wanted a two-year plan or a five-year plan.
My dad looked at him and said,
“Are you fuckin’ kiddin’ me? I’m eighty-six years old! Give me the shortest plan you got, ’cause I don’t know how much longer I’m gonna be around.”
My dad wasn’t trying to be mean or rude. That’s just the way he talked. He cussed a lot and was not apologetic about it.
I explained to the sales guy, we just need a phone with a pay-as-you-go plan, a phone that was cheap, easy, and so simple that a chimpanzee could figure it out. No offense to chimpanzees, some of my best friends act like chimpanzees.
The guy explained that there weren’t a whole lot of numbers available for that area.
I had no idea what he was talking about, but he told me a number had just become available–some guy had just cancelled his service, so we took that number.
We got in the car, started the long drive home, up the small, winding two-lane mountain road that led to Rat Tail Ridge. My dad held the phone in his hand like he was holding a dead bird in his palm.
PING!
My dad got a text message. He looked at me.
“What the hell is that?”
I grabbed the phone and looked at it. It was a photo of a woman who weighed at least 400 pounds. She was completely naked, and it was hard to tell what she was doing. It looked like she was trying to scratch her head with her big toe.
My dad took the phone and looked at the photo.
“Is that a naked woman?”
“It’s kind of hard to tell, Paps, but yes, I think it is.”
A few minutes later-PING! He looked at his phone.
“What the hell is that?”
I grabbed his phone. I almost drove off the road. It was another photo of an incredibly large woman on her knees, completely naked, on all fours. It looked like she was looking on the floor for a contact lens.
Funny, my dad wasn’t into any of that kind of stuff. He never had girly mags around, never even had a Playboy. I never found any of that stuff around the house when I was a kid, and I rarely use the word “never.”
PING!
They kept coming. Text photos of huge naked women. My dad asked if all cell phones were like this. I explained to him that the guy who had the number before was probably into some kinky stuff, and I would try and fix it when we got home.
We got to Rat Tail Ridge, and I fixed his phone, blocked some numbers, cleared out some junk.
My dad started enjoying his cell phone. Whenever my dad called, he’d never say hello, how are you, he’d just start talking. Most of the conversations were quick and to the point, and then he’d hang up without saying goodbye. No hello, no goodbye.
I loved my dad, and he wasn’t an easy guy to love. We started talking on the phone, just about every day.
He passed away last year. I still have his cell number on my phone.
I just can’t bear to erase it.
Broccoli and Peppers 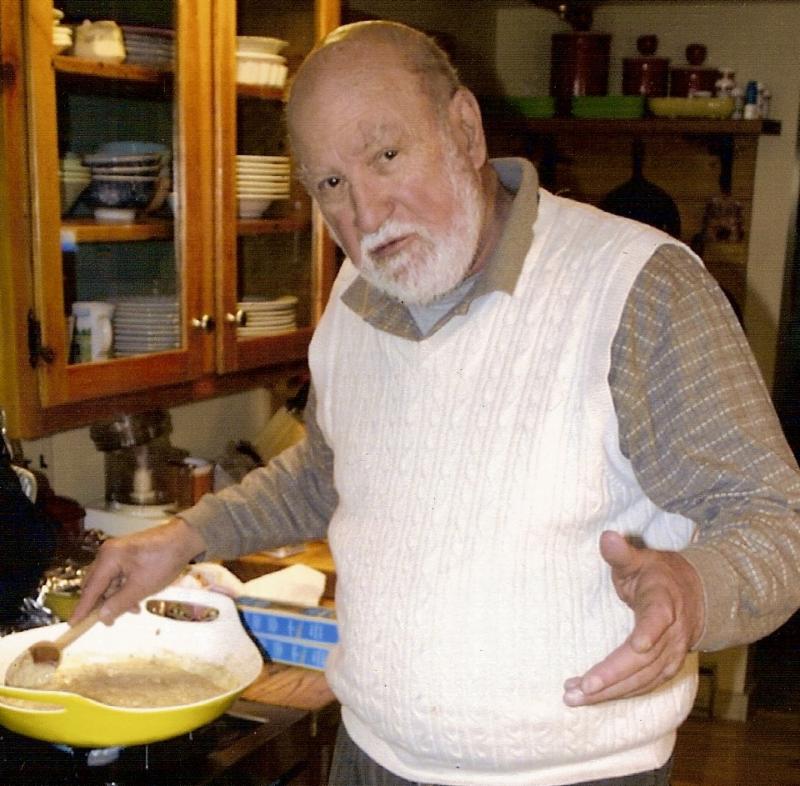 My dad didn’t like vegetables.
When he got older, I would try and get him to eat a salad, or some vegetables, and he’d say,
“I’m eighty-six years old. I’ve made it this fucking far without eating that shit, and I ain’t startin’ now.”
He wasn’t all warm and fuzzy.
This dish can be used as a side dish, or as an appetizer. You can serve it over rice, pasta, or on bruschetta. Put it on a pizza! It’s colorful, healthy, and delizioso.
This will serve 4 people, or 1 huge naked woman.
Ingredients
4 tablespoons extra-virgin olive oil
6 cloves of garlic, sliced thin, about 2 tablespoons
Crushed red pepper (I use ¼ teaspoon to start)
¼ cup dry white wine
1 orange bell pepper, seeds and stems removed, chopped
1 red bell pepper, seeds and stems removed, chopped
1 yellow bell pepper, seeds and stems removed, chopped
4 cups broccoli florets
¾ cup vegetable broth (or chicken broth)
Salt (to taste)
Here we go!
Get a large pan, put it over medium-low heat. 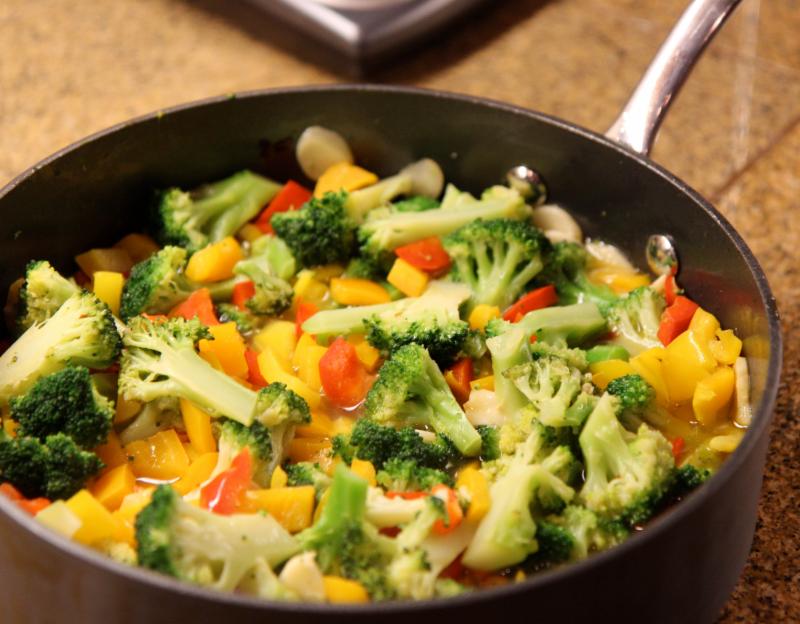 Add the olive oil, the garlic, and the crushed red pepper and cook for a couple minutes until the garlic is a light gold color.
Add the white wine, turn the heat up to high, and cook for 2 minutes.
Then reduce the heat back to medium-low.
Add the peppers, and cook for 5 minutes. Stir often.
Add the broccoli. 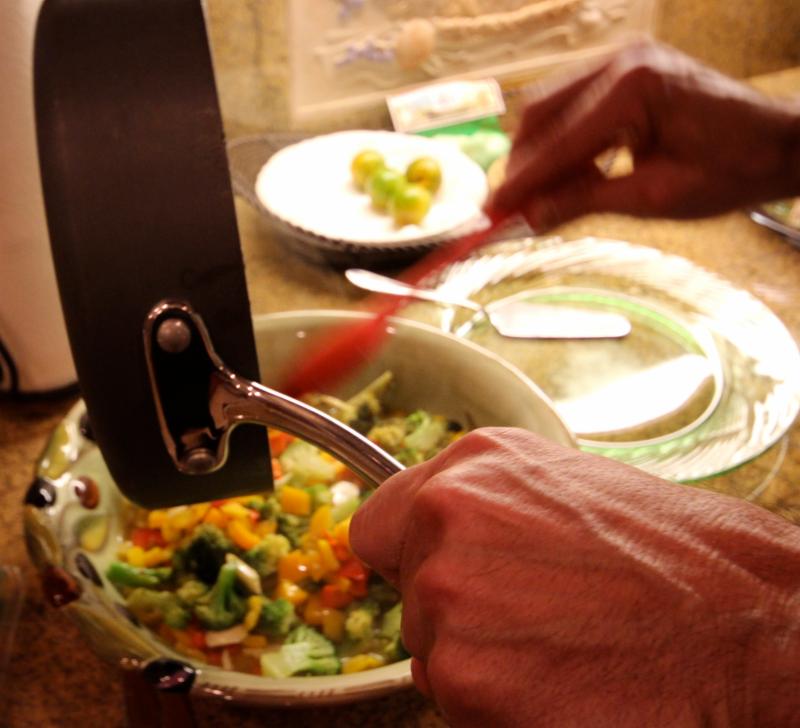 Add the vegetable broth, and turn the heat to high until it starts to bubble.
After it gets bubbly, turn the heat down to a simmer.
Cook for an additional 6 minutes or until the broccoli is done. Stir often.
Taste for salt and adjust.
Some people like their broccoli crunchy. I like it cooked–not mushy, but firm.
This dish is delish with fish–any one of the Slim Fish Dishes would go well with this. 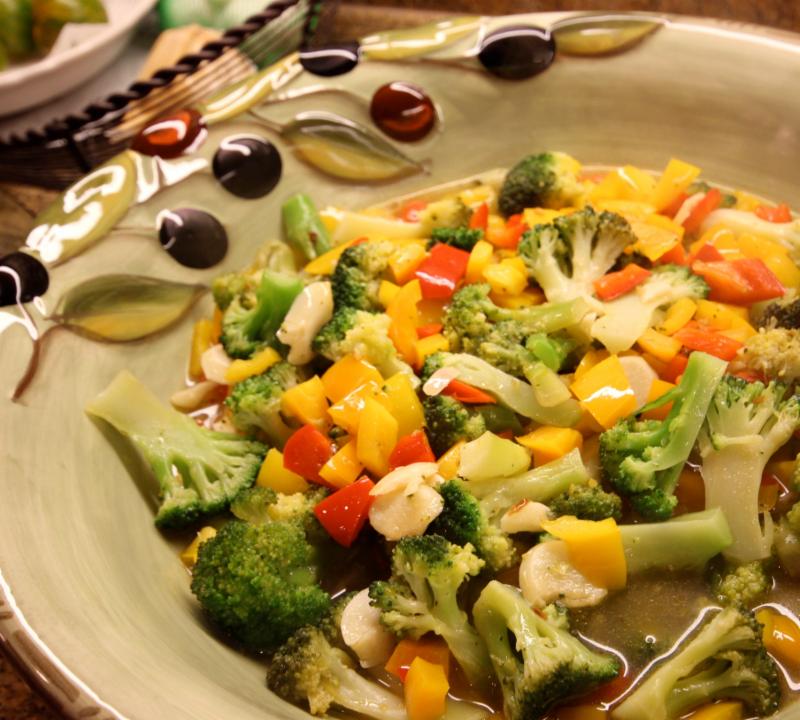