Greetings, Oh Slim Ones,
What do you call birds that stick together?

How are you Slim People? I’m just checking in on you. Everybody OK?
I need to remind you about the show on Saturday in Lodi, California, at the Watts Winery. Showtime is 1 PM. Come on out, have a glass, and have a blast with the Slim Men.
https://www.wattswine.com
HERE’S THE NEW SLIM SHACK NEWS

When I did the concert in San Antonio last week, I streamed it on FaceBook LIVE.
It was the first time I ever did that. I took my iPad mini, clamped it onto a light pole, turned on the camera, and just let it roll for the whole show.
I didn’t tell anybody about it, because I had no idea if it would turn out. People on FaceBook seemed to like it. I’ve only seen bit and pieces because I’m not a big fan of watching videos of myself…
But I did learn a lot. I learned that I have to stop clomping around the stage like Frankenstein. I thought I was moving like Michael Jackson, but I looked more like AndrewJackson…in clown shoes. Man, my feet looked freakishly large!
I’m gonna try and stream the show tonight, but this time maybe just shoot it from the knees up!
The show is in Santa Rosa, California, at Montgomery Village. Showtime is 5:30 PM Pacific, 8:30 East Coast.
Now, keep in mind, there are a lot of variables, and the “F” factor is high. There has to be a strong, uninterrupted internet connection.
And I am going to shoot it on my new iPhone, and I have no idea how it will work or how long the battery will last.
But I’m going to try and get this done for you Slim Folks.
My FaceBook page is Slim Manicotti. Why not just “Slim Man”?
Well, even though I joined Facebook early, “Slim Man” was already taken. So I used “Slim Manicotti” instead. I thought it was funny.
I wasn’t thinking about how the hell anybody would ever find me!
If you want to see the show tonight, tune in to Slim Manicotti on FaceBook. I hope it works! 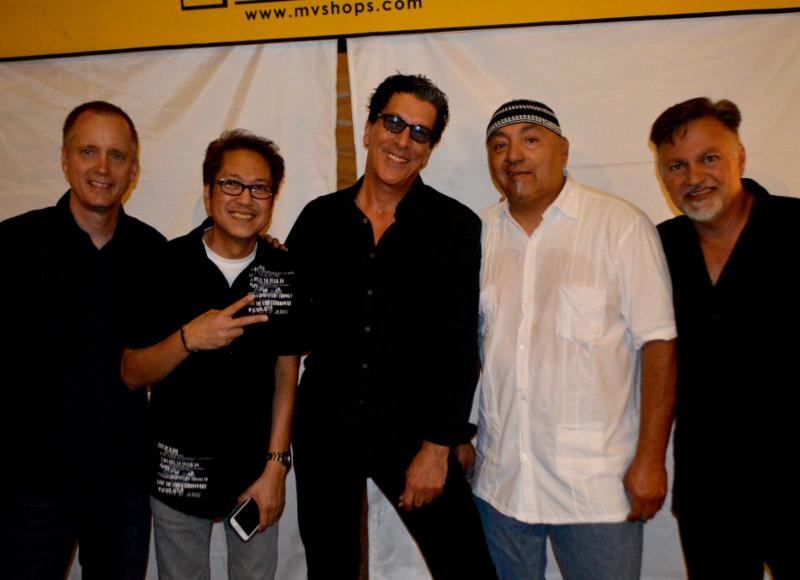 Dave Hawkes on drums, Tateng Katindig on keyboards, Mombo Hernandez on percussion, and Greg Vail on sax.
Greg just got off the road with Luis Miguel, the incredibly famous singer from Mexico. And now he’s playing with the Slim Men tonight. Lucky us!
Keep in touch, Slim Folks. And keep smiling.
Who loves ya?