Hello You Good-Looking Slim People,
A month before my uncle died, he poured olive oil all over his back. After that, he went downhill fast.
Slimmest of All People! How are we? Everybody peachy?
Before we get into the SlimSanity, I needs to remind you to come see a Slim Show.
I’m going to Wisconsin next week to play for my beloved Cheeseheads on Friday, November 16th. All deets are down below.
And we have the Slim Man Christmas concert on Thursday, December 13th, at the Rams Head Tavern in Annapolis, MD. It’s gonna be epic!
https://www.ramsheadonstage.com/search/?q=Slim+Man
And don’t forget about the Slim Man Rat Pack Show on Sunday, March 10th. Mr. Man’s gonna sing some Frank, Dino, and Nat, with a 17-piece band, at the coolest hotel in Palm Springs, CA. The Riviera!
Watch the video and get your tickets right here:
https://slimman.com
HERE’S THE NEWS FROM THE SLIM SHACK

I went to a big party last night. It was at an amazing house, obviously not here at Slim’s Shady Trailer Park. No. This place had indoor plumbing.
Rick Braun and his band played. He’s a trumpeter, he’s really good, and it was good to see him again. The band was excellent, the party superb.
I didn’t drink…I did Sober October (the longest month of my life!) and now I’m doing NoVino November.
The invitation to the party requested that people not talk about politics. I get it. There’s a lot of nasty stuff going on out there in the political world.
There’s been a lot of mudslinging going on these days, especially among politicians. There’s an election today, and there’s been a lot of muckraking leading up to it.
Politicians going back and forth with the insults and name-calling. Accusations are flying, hostilities are at an all-time high, and there doesn’t seem to be any solution.
That got me thinking, Slim People. And those 4 or 5 of you that actually read this newsletter know that I suffer from a malady…
Attention Surplus Syndrome. You know the acronym. I think about things way too long. It’s the opposite of A.D.D.
And as my A.S.S. kicked into gear, I started thinking about all this nastiness between our beloved political leaders…what are we supposed to do, Slim Folks? How do we solve this problem?
Well, maybe we ought to bring back dueling. That’s right, dueling.
After you read this, you’ll be saying, “Slim for President!”
More likely you’ll be saying, “Slim’s nuts!”
Dueling got its start way back when. A man would insult another man, and the insultee would challenge the insulter to a duel. Back then, they settled the duel by fencing.
I’m not talking chain-link here. Or white picket. I’m talking about fencing with swords. Fencing swords are those dainty, little, flexible swords, they aren’t like the ones used in the Gladiator film.
Whoever drew blood first (it could be just a pin-prick and usually was) would win the duel.
The loser would have to herd the guy’s goats for a month, or clean the chicken shit out of the guy’s coop once a week. Something along those lines.
When guns were invented, duels became a touch more lethal. When one man insulted another, the insulted dude would issue a duel, and choose the firearm.
“I challenge you to a duel! Pistols at dawn!”
Duels were almost always between men. There was a code of chivalry when dueling, called a code duello, created by the Italians (who else?). So, duels were fought with certain rules. For instance, men (usually officers or politicians) had to be similar in rank and status.
And age. I mean, you couldn’t challenge your kid to a duel for not eating his asparagus. And you couldn’t challenge your wife to a duel because she just bought a handbag that cost more than the minivan. Duels were a man-to-man thing.
Duels became such a problem during the Revolutionary War that General Washington had to tell his officers to knock it off. He was losing too many men. Seriously. It was a problem.
I haven’t seen the “Hamilton” musical yet. It’s based on the life of Alexander Hamilton, a politician who was the former Secretary of the Treasury. Hamilton insulted then Vice President Aaron Burr, and Burr challenged him to a duel.
Keep this in mind…Aaron Burr was the sitting Vice-President of the United States. He was in office when he issued the challenge to Hamilton.
The duel took place in Weehawken, New Jersey, in 1804. This is how prevalent dueling was back then…the pistols that Hamilton and Burr used were specifically made for dueling. They were called dueling pistols. They fired a single shot.
And during that fateful episode on the Jersey shore (not to be confused with the TV show) Hamilton and Burr drew pistols; Hamilton fired first and missed. Burr shot second and didn’t. He wounded Hamilton, who died the next day.
Duels were outlawed in Washington, DC, in 1839, after a congressman from Maine accused a congressman from Kentucky of taking a bribe. Seriously.
Two more politicians, slinging the mud, raking the muck, who decided to have a duel to settle their differences. And then dueling became illegal.
And that got me thinking…what if we made it legal again?
No matter where you stand politically, we can all agree that there’s a lot of animosity and accusations going on between our honorable elected officials, especially on those nasty TV ads. What to do?
What if we brought back the duel?
Say the Vice President insults the Secretary of Whatever. The S.O.W. would challenge the V.P. to a duel.  We could probably put these duels on pay-per-view and pay down the national debt.
Now, keep in mind, we’d have to have the same rules in effect as when Hamilton and Burr had their duel. It would have to be only among high-ranking men, not the general population.
So if McDonald’s got your order wrong, you wouldn’t be able to challenge Ronald McDonald to a duel. You’d have to go a little higher up the totem pole.
And guns might not be a good choice of weapon. Gunplay might have solved disputes in the Wild, Wild, West, but these days, there’s just too much gun violence.
Maybe we could have boxing matches instead. Or MMA? Those politician guys might look good in a cage, dressed in tights, beating the crap out of each other. Maybe arm wrestling? Cornhole?
For instance, one politician would insult another. The insultee would challenge the insulter to a duel.
“I challenge you to a duel! Cornhole at dawn!”
The loser would have to leave politics. Or leave town. Or clean dog poop off the guy’s lawn for a year or two.
On second thought, maybe we should forget my dueling idea. You see what it’s like, living with my dumb A.S.S.?
Keep smiling, Slim People. And keep in touch. 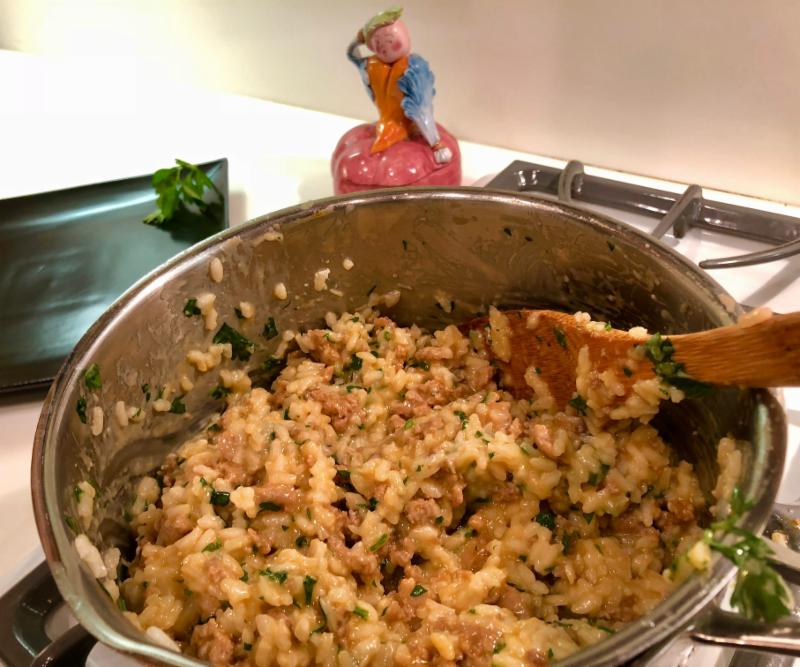 PS…Here’s a new recipe and video for Risotto with Hot Italian turkey sausage. Any recipe with “Hot Italian” in the title has to be good! Here is the link, it’s Free for All Slim People:
https://slimmancooks.com/?p=4739