THE NEWEST NEWS FROM THE SLIM SHACK

I played a 420 party Monday night. 420 is the code name for marijuana, although I don’t know why we need secret names for weed now that it’s legal. Why not just call it a pot party, like they did back in the Swinging Sixties?
The party was held at a place called Venus de Fido. It sounds like I’m joking, but I ain’t. Venus de Fido is a resort and spa for people and their pets. You can get a massage while your dog has his teeth brushed, flossed, whitened and straightened. 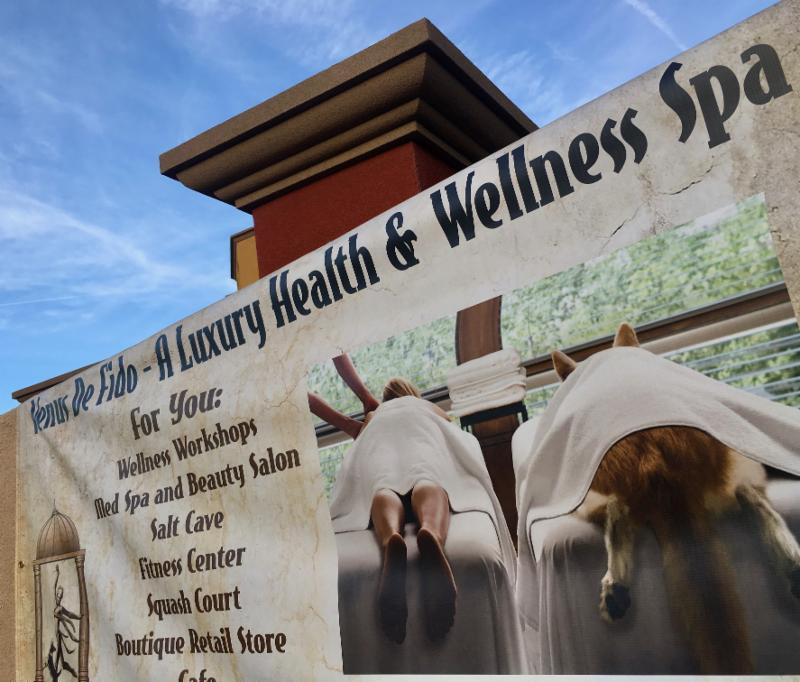 Venus de Fido has an indoor dog run. The ceiling is painted like the sky; they even have cotton clouds floating on wires. During the day it’s a dog run, and at night, they sometimes have concerts.
Seriously.
They roll out a fake grass carpet, they set up a bar and a snack stand in each corner, and a stage and lights and sound at the other end. They have tables and chairs, and human beings sit and drink wine and listen to music.
I walked in, and went downstairs. Guitarist Blake Aaron and his band were playing. Blake called me on stage. We did “Faith in Us”.
The band did an excellent job, seriously, they played it just like the original recording, which was done back in 1812. When the song finished, I decided, on the spot, to do a Tom Petty song, “Won’t Back Down.”
I assumed the band knew the song, and well, that was stupid of me. They didn’t. I was screaming out the chords and the arrangement as we chugged and struggled and rolled along.
It was hard to tell if we were doing a song by Tom Petty or Richard Petty. It was what we show biz folks call a train wreck. And I was the engineer.
After I  skulked off stage, someone took me next door to a large room where there were vendors on each side, vendors at long tables. They were selling marijuana. And marijuana lollipops and chocolate kisses and oils and all kinds of stuff. 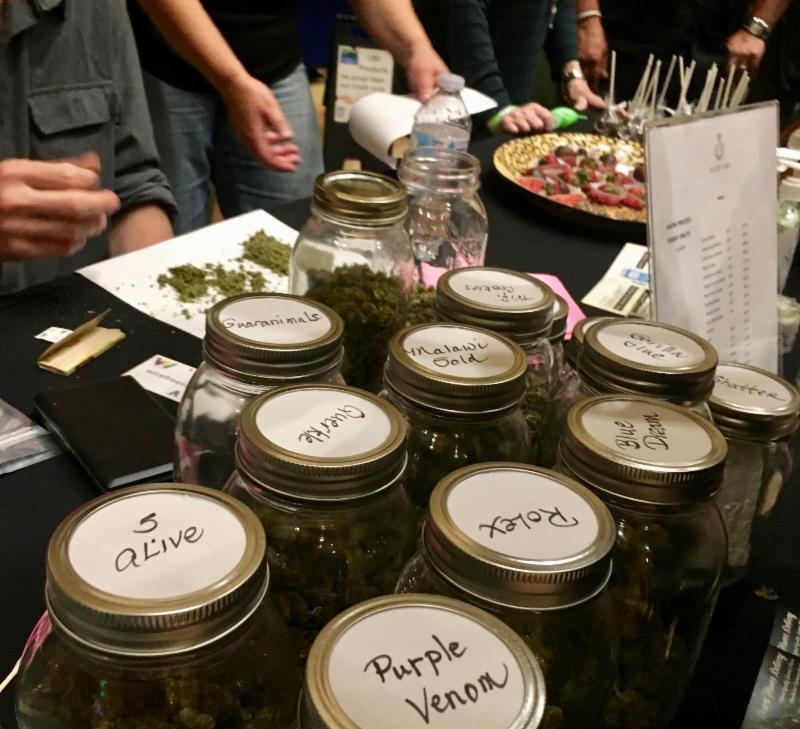 The jars of weed had names Sharpied on the tops. 5 Alive. Purple Venom.
They had a big sign offering medical evaluations by a doctor. “Do You Suffer From…upper back pain, lower back pain, depression, neck pain, insomnia, ADD…
I suffer from all those things!
Except the ADD. I wanted to ask the doctor if weed might help my ASS, my Attention Surplus Syndrome, but I never got a chance.
I got whisked away to the upstairs patio, where they served pizza and wine. And since it was outside, people smoked.
Back in the day, they would have sent a SWAT team to shut down a party like that. You could go to prison for 10 years for having a joint in your possession.
My how things have changed.
Let me share a story with you, my Slim People. A true story.
I have a friend, let’s call him Mick. It’s not his real name, but he was a real guy. Mick took over his father’s office installation business.
Here’s how it worked; someone would build an office building, and they’d call Mick’s company to install the offices. He was in his 20s, and business took off. He was wearing hand-tailored suits and driving a new Jaguar.
Then Mick lost it all to drugs. One night, he knocked on the door of the Slim Shack. He had no place to go and needed a place to crash. He stayed for the summer, and I didn’t think he’d last until the fall.
He was out of control, snorting cocaine every day, drinking scary amounts of vodka, and taking Valium to come down.
One day he left, kinda disappeared. Didn’t hear a word for years.
I did a Bona Fide CD back in 2014. I raised the money on Kickstarter, and one of the rewards was that I bring the first copy of the CD to your house, hand-delivered, anywhere in the US.
Well, the guy that got the reward lived in Colorado. Let’s call the guy Ed. Special Ed.
Special Ed had emailed me months before, and asked me to sing a song to his wife on her birthday. I sent him my phone number, and while I was getting off a plane in Reno, Special Ed texted me his wife’s number, and I called her and sang a song.
A song called “Sweet Lorraine.” She started crying.
I didn’t think it was that bad!
But she told me they were tears of joy. We chatted for a bit. Then a few months later, Special Ed made a pledge for me to hand deliver the new Bona Fide CD.
So I started looking at flights from Palm Springs, CA, and hotels in Denver. A friend told me that Mick was now in Denver, he gave me the number and I called him up. Mick told me I could stay at his place.
Well, I flew to Denver, rented a car, and delivered the CD to the Kickstarter folks, two wonderful people (military/law enforcement) who lived with their young grandson out by the mountains. They had a stand-alone brick pizza oven out in back of the house, and they made pizza, and we watched football. 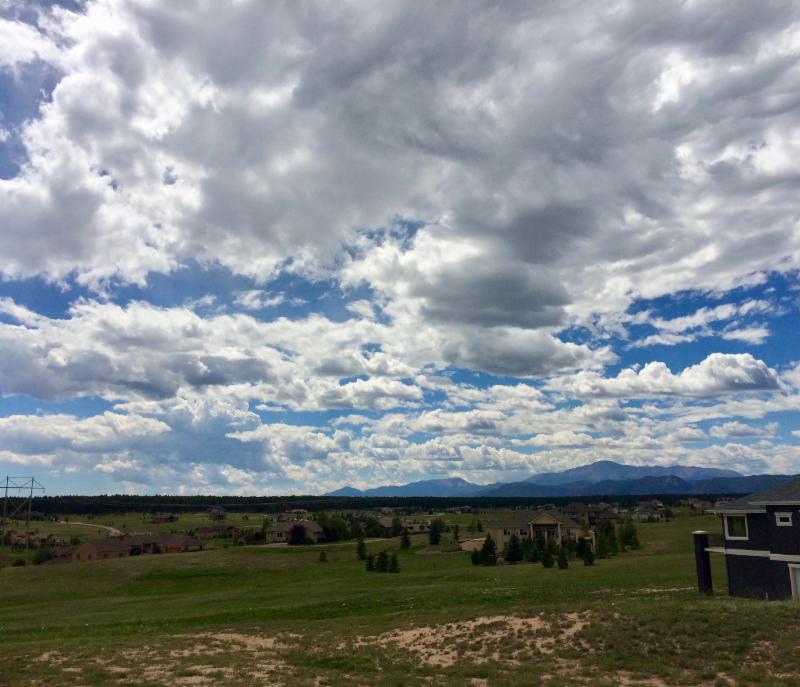 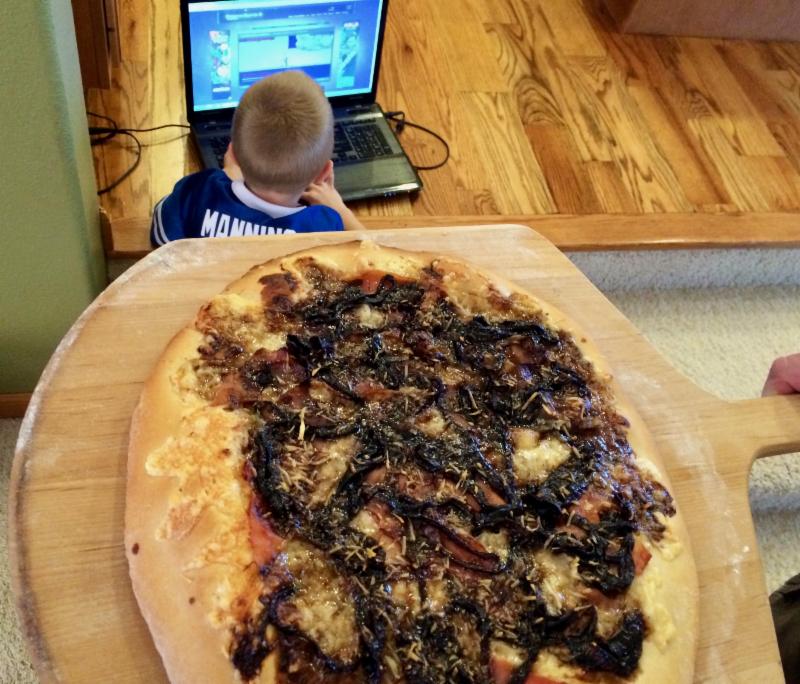 I had a great time, seriously. Nicer people you will never meet. We’re still friends.
Then I drove to the address that Mick had given me; it took a couple hours to get to Denver. I was expecting some shabby little joint, but this was a high-rise with a parking garage with more security than the US Embassy in Beirut.
I took the elevator up, and there was Mick. He was standing in the doorway of a pretty damned luxurious penthouse condo with a view of downtown Denver. I was floored. How? What the…?
Then Mick poured me a glass of wine and told me the story…
After he left the Slim Shack in Baltimore, a friend gave him a beat-up pickup truck. Mick was driving south when the truck got totaled, and everything he had was lost.
Didn’t even have a cell phone or a credit card. Nothing.
He made his way to Denver, and started working as a grunt for an office installation place, just like the one he used to own. He wore a hard hat and a tool belt, making minimum wage.
Mick worked his way up. He eventually took over the company, it did well, and Mick bought a warehouse outside of Denver for all the office stuff. $100,000.
Not long after, out of the blue, the state of Colorado designated that specific warehouse area as a grow district for marijuana. Mick got an offer. How much?
Three million, cash. Swear to goodness, true story.
The last email I got from Mick was a few weeks ago, he was on some Caribbean island where he was building a seaside cottage. He sent me photos. Unbelievable.
Marijuana is big business, Slim People. There’s money in them thar hills.
Willie Nelson has his own brand of pot called “Willie Weed.”
I’m thinking maybe I should cash in on the craze, too. Perhaps I should create…
Mr. Man’s Marijuana Meatballs.  Slim Poppa’s Pot Pesto. Uncle Slimmy’s Three Weed Pizza.
Keep smiling, Slim People. And keep in touch.
Who loves ya?
Uncle Slimmy